Fortunately, I’ve been preparing for this post for years without even knowing it. If you’re headed out on a long trip, want to keep your kids from going nuts while you’re running errands around town, or need something to entertain them during quiet time, all of these are books you can’t miss with.

I hope you’ll love them too!

If you want your kids to be better at listening to audiobooks, try keeping their hands busy! Pop in your email and I’ll send you a list of 20+ ideas your kids can do while listening to an audiobook! 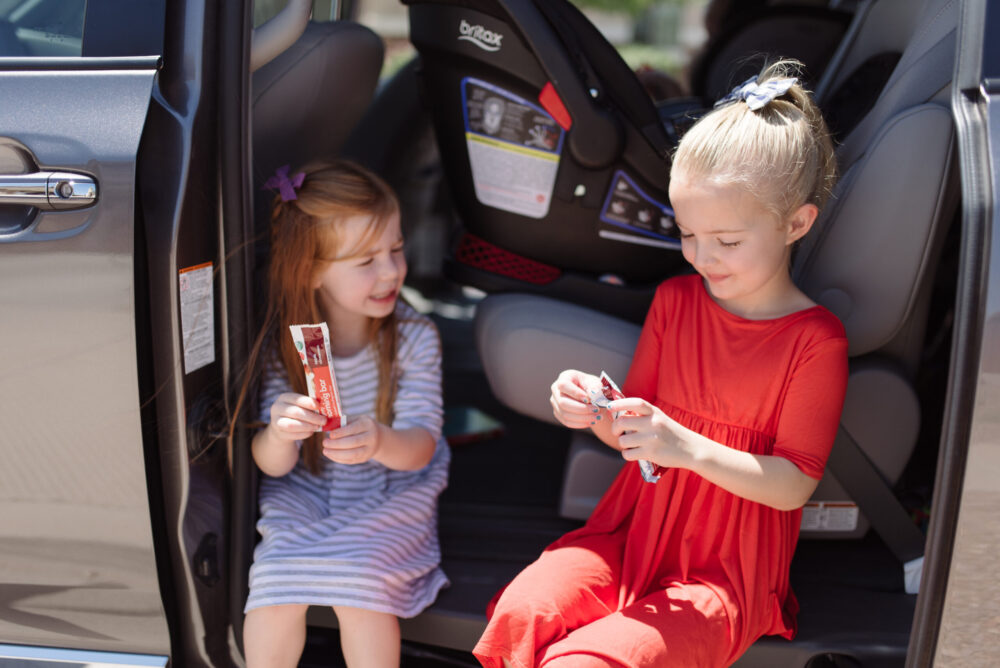 Peter and the Star Catchers by Dave Berry and Ridley Pearson
Whenever someone tells me they just finished listening to Harry Potter, I always recommend this audiobook. The story isn’t very similar (it’s a Peter Pan story, brilliantly and hilariously reimagined), but it’s full of magic AND it’s narrated by Jim Dale, who reads the Harry Potter audiobooks. This is a do not miss. Also there are also five books in the series, so you won’t be running out of listening material anytime soon. (Full review here)

The Bartimeus Trilogy by Jonathan Stroud
This series was a complete lucky accident – Bart and I were heading on a road trip in our childless days and looking through the adult audiobooks and this one had been mis-shelved. Since it included the word “Bart,” my husband naturally picked it up and the trilogy became one of our all-time favorites. The story about a magician’s young apprentice who, hoping to get revenge on a magician who humiliated him, summons a djinni he cannot even BEGIN to really control, is gripping, the narration is INSANELY good, and I can’t wait to listen to it with our girls in the next year or two. The first book in the series is The Amulet of Samarkand.

Ways to Make Sunshine by Renée Watson
If you love the world of Ramona Quimby and the other inhabitants of Klickitat Street, you’ll love this book about another ordinary family living in Portland and dealing with the ordinary issues of growing up. The stories of Ryan Hart and her family are sweet and funny and ones that children will relate to – from moving to a new house to hunting for treasures at the Portland Saturday Market with her best friend. The sequel, Ways to Grow Love, just came out in April so it’s the perfect time pick them both up.

Princess Academy by Shannon Hale
I read this book on paper, then Bart and I listened to it when we moved to Boston and had days of driving a U-Haul together, and the girls and I just listened to it in the car this past fall. Don’t let the title fool you – this book isn’t just for girls. All six of us (well. . . .maybe not the baby) are huge fans, especially because of the full-cast audio with original music. (Full review here)

Savvy by Ingrid Law
I just LOVE this book about a family where everyone gets a magical talent (a savvy) when they turn 13. But just before Mibs’ 13th birthday, a tragedy occurs and now Mibs is desperately hoping her savvy will turn out to be something that can save her family. (Full review here)

The Trumpet of the Swan by E.B. White
I’m pretty sure Ella has listened to this audiobook at least a half dozen times and it was one of my favorite books as a child. This one is a great one if your kids are a little younger, but still fun if they’re older too.

Ghost by Jason Reynolds
Ghost is a very fast runner – starting with a run from his dangerous father when he was a little boy. Now, he mostly runs away from his problems until an Olympic-runner-turned-coach sees Ghost’s incredible raw talent and wants to help him harness it for the Junior Olympics. But Ghost will have to stop running from his past in order for that to happen and that might be the hardest thing he’s ever done. This is the first book in a four-book series, each of which focuses on a different member of the track team. Jason Reynolds is a big name in the world of children’s literature for good reason – this book is FIRE.

Whatever After by Sarah Mylnowski
This is one of Ella’s FAVORITE series, and although it’s not high-brow literature, it’s a fun series of fractured fairy tales. She’s listened to them ALL multiple times and I listened to the first one at her request.

A Single Shard by Linda Sue Park
When I was working more seriously on reading all the Newbery winners, I picked this one up, knowing exactly nothing about it. A story about potters in 12th century Korea might not sound thrilling but this book is PHENOMENAL. I listened to it again with my girls this past fall and we all were entranced. I may have gotten teary in the driver’s seat multiple times.  (Full review here)

From the Mixed-Up Files of Mrs. Basil E. Frankweiler by E.L. Konigsburg
I had read part of this book but never finished it as a child. Listening to it as a family was a DELIGHT and I just loved every bit of this book about two siblings that run away from home and live, undetected, in the Metropolitan Museum of Art in New York City.

Ribsy by Beverly Cleary
I’m fairly sure at this point that Bart and I could recite the entire book from memory since Star listened to this on repeat all last spring. Beverly Clearly is a master and her audiobooks are just a delight.

All Thirteen: The Incredible Cave Rescue of the Thai Boys’ Soccer Team by Christina Soontornvat
I’ve been talking abut this book all spring because it’s just SO GOOD, so if you haven’t read it yet, this is your signal that now is the time to go pick it up. The audiobook made this incredible true story come vividly to life for me and even though I knew the ending, I was on the edge of my seat the whole time. And seeing the efforts made to get them out makes it even more incredible that they actually succeeded.

Homecoming and Dicey’s Song by Cynthia Voigt
I didn’t read this series until I was an adult and I loved every second of this story about four children abandoned by their mother who walk hundreds of miles to find a home. They’re pretty long, so they’re great if you have hours and hours of time on the road. I think my girls are still a LITTLE young, but I can’t wait to listen together in another few years. 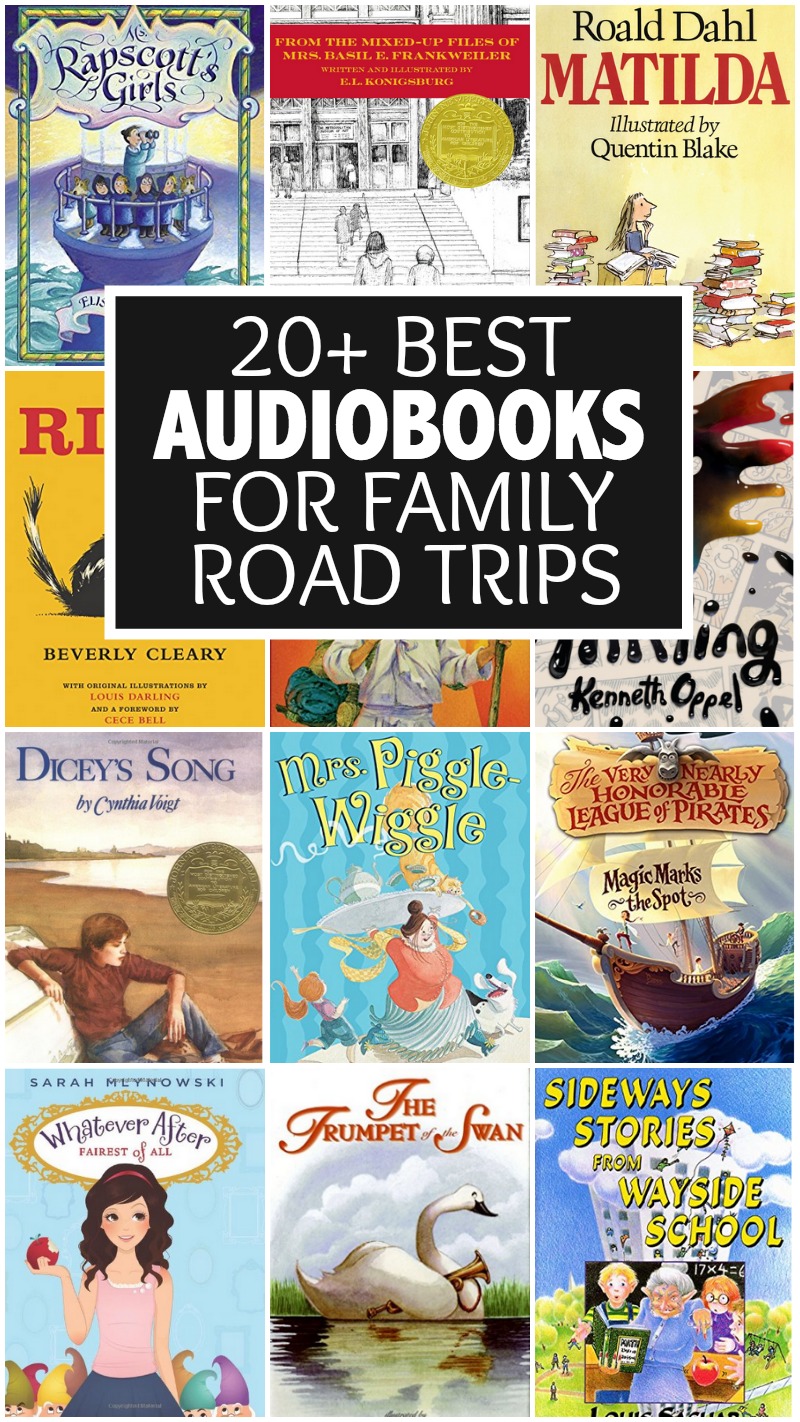 Skulduggery Pleasant by Derek Landy
Five minutes into this audiobook and I had to stop because I knew Bart would hate to miss this one. We laughed our faces off listening to this one together as we drove back and forth to grad school in 2009. It’s a mystery with a young girl and a skeleton detective determined to solve it and it’s wildly inventive and super funny. Note that I’ve only listened to the first book in the series and I’ve heard that subsequent books can get fairly dark. (Full review here)

Ms. Rapscott’s Girls by Elise Primavera
Ms. Rapscott is a little bit of a Mary Poppins, running a boarding school tucked inside a lighthouse for children who have extremely busy parents. The children aren’t thrilled to be there at first (would you, if you arrived in a box?), but they quickly learn that they are in for the adventure of a lifetime.

The Penderwicks by Jeanne Birdsall
This series is pretty recent (in the last ten years), but it has the feel of a classic and we all loved these stories about four sisters and their summer vacation. There’s a reason these books are BELOVED.

Mrs. Piggle Wiggle by Betty MacDonald
This might be the most listened to series in our home. Ella has listened to them on CD and on the tablet dozens of times over the years and they just never get old with childhood bad habits (staying up too late, picky eating, etc) getting cured by Mrs. Piggle Wiggle’s inventive cures.

The Very Nearly Honorable League of Pirates by Caroline Carlson
I would listen to Katherine Kellgren narrate a phone book (she’s the reader on both the Bloody Jack series and one of my all-time favorite audiobooks, My Lady Jane) and she’s no disappointment in this delightful series of books about a girl who longs to be a pirate but gets sent to finishing school instead.

Chitty Chitty Bang Bang by Ian Fleming
My girls have all listened to the audiobooks of this series on repeat for years. When we watched the movie, they kept saying, “This is not like the books!” Those are my girls.

Narwhal and Jelly by Ben Clanton
We listened to this audio production on a road trip last summer and my girls were OBSESSED with it. (And to be honest, I was too – I still sing some of the little songs). It’s five books in one for a total of about an hour and I cannot rave enough about it.

Sideways Stories from Wayside School by Louis Sachar
Both of my older girls have listened to these stories many many times on audio about Wayside School where everything is a little (okay, lot) weird. The chapters are more episodic so that’s nice if you’re starting and stopping a lot. Plus, there is also Wayside School Gets a Little Stranger (which isn’t on Audible) and Wayside School is Falling Down (which is).

Matilda by Roald Dahl
I think Roald Dahl’s books are just MADE for listening and I could have added many of his titles (right now, Star is obsessed with Fantastic Mr. Fox and has listened at least a dozen times since the beginning of the year). Matilda is one of my favorites, plus it’s narrated by Kate Winslet.

When Stars are Scattered by Victoria Jamison and Omar Mohamed
You might think a graphic novel is really best enjoyed when you can see the . . . you know, graphics. But the audio version of this stunning book is out to prove you wrong with a full-cast narration that brings this true story of a young boy living in a refuge camp in Kenya, caring for his non-verbal younger brother and trying to attend school to life in the most stunning way. In fact, people who have listened to this audiobook tell me they feel sorry for people who read it on paper instead of getting to experience the audio version. This is a terrific one for both children (probably about 8+) and adults!

I hope your family will love these audiobooks as much as we have – if you have other recommendations or questions about using audiobooks with your children, leave a note in the comments!