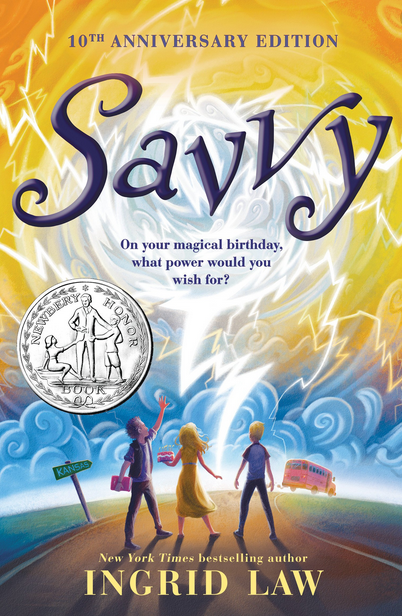 There has been a whole lot of buzz about Savvy being a possible Newbery title for 2008 and now I’m inclined to agree – it just has that Newbery feel to it.

This Savvy book starts out with Mibs and her family live out in the absolute boonies of Kansas; they moved there after her older brother, Fish, turned thirteen and discovered his moods manifested themselves in uncontrollable winds – the one on his thirteenth birthday whipped up a hurricane and necessitated a move far away from the ocean.

This wasn’t a total surprise, though, because all of Mib’s family gains a “savvy” on their thirteenth birthday. A savvy is some special and magical talent. Mib’s grandma can bottle radio waves, her grandpa can create land, and her other brother can manipulate electricity.

Two days before her thirteenth birthday, Mibs is anxious to discover what her own savvy will be, until her father is involved in a terrible car accident and lays in a far away hospital deep in a coma. Her mother and oldest brother rush off to be with him, while the rest of the family remains behind to continue life and celebrate Mib’s birthday.

A few events in the early morning of her birthday convinces Mibs that her savvy is to awaken people and she believes that, if she can only get to her father, she can wake him up from his coma. At the church that morning, where her birthday is being celebrated, she sees a Bible-selling bus that is based in Selma, where her father is in the hospital. Determined to get to her father, she sneaks on to the bus, followed by her brothers Fish and Samson, and the preacher’s children, Bobbi and Will Junior.

And yet, she is starting to get a little nervous that maybe the events of the morning were coincidental – when she sees a tattoo on Bobbi’s lower back that begins to talk to her, telling her Bobbi’s inner thoughts and then when the bus driver’s two arm tattoos also begin shouting at her, she suspects that this is truly her savvy, not an ability to wake people up. But now they’re on the bus and have convinced the bus driver to take them to Selma and she’s got four other kids in tow, so it’s not exactly the moment to turn around.

Off they go, heading toward Selma, with many detours and funny happenings along the way.

I generally am afraid of road trip books (I know – what’s wrong with me? For some reason they just never sound interesting to me), but the road trip is brilliant and funny, even if I could see the ending coming from the first few chapters.

There were many well-developed characters with good arcs – I especially liked that Mibs could hear what they were thinking via her savvy and appreciate how different their actions and words were from their thoughts. I liked Mibs and her spunky, brave attitude. I liked reading a story about a solid, loving family.

Savvy has a really timeless feel to it – nothing in it really dates it; it could have been written this year or fifty years ago. Having just recently read The Penderwicks (finally!), I think Savvy has the same appeal.