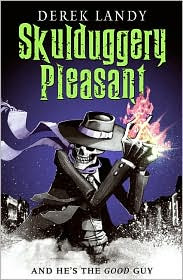 On Goodreads, where you score the books you read with 1-5 stars, I try to be sparing with my 5 stars. My criteria tend to be 1) a book I absolutely loved loved loved, 2) a book I would reread several times and 3) a book I would recommend without hesitation (that last one is what keeps many a book from being a five star).

got a five star from me for being clever, funny, and for being a CD that Bart took out of the car and listened to on our home CD player. It was that good.

Stephanie is a 12-year-old girl and her uncle, Gordon, has recently died of a heart attack. He was a very successful writer and his books were full of magic and horror (Stephanie’s mother forbids her to read them, since they will give her nightmares). Then, when Gordon’s will is read, it turns out he’s left his entire fortune, his property and the royalties for all his books, to Stephanie (much to the displeasure of Stephanie’s horrendous aunt and uncle (the will says “I love you all, even the ones I don’t like very much. That’s you, Barrel.”)).

Also present at the reading of the will is the oddly named Skulduggery Pleasant, a long-time friend of Gordon’s who is always dressed in a long coat, hat, scarf, and gloves, despite it being the heat of summer.

Later that night, when Stephanie is alone at Gordon’s house (for reasons I won’t discuss here), a man starts banging on the door demanding to be let in or he’ll kill her. Fortunately, Skulduggery arrives at almost that precise moment, fights the bad guy, and saves Stephanie. Unfortunately, in the fight, his hat comes off and he is revealed to be nothing but a skeleton. Hmm, how odd. And it comes out that Gordon’s books were not exactly just made up – magic is real and Gordon, although not magical himself, knew of it and made a fortune writing all about it.

And, horrifyingly, Stephanie begins to realize, Gordon’s death was no heart attack – he was murdered in an effort to get something – some magical item – that belonged to him and couldn’t be possessed by another while he lived. So Stephanie joins forces with Skulduggery to find out who killed Gordon and what the next step in the obviously diabolical plan is.

Skulduggery Pleasant reminded me of a cross between Harry Potter and the Bartimaeus trilogy. What makes these books so awesome, though, is not the action or the magic, but Skulduggery’s snappy humor and Stephanie’s equally clever and quick responses to it. Bart and I laughed aloud hundreds of times over the course of six CDs.

It’s worth mentioning that we listened to it on CD because the narration is fantastic and there is terrific music between each chapter. In fact, the audio version was an honor winner of Odyssey award which debuted last year to celebrate good audio books. And this is one of the best.

Apparently, there will eventually be nine books in the Skulduggery Pleasant series (so far there are two) and Warner Brothers may be making a movie of it in 2010.

This is a funny, funny book. I loved every moment of it, including the mock interview with Skulduggery at the end of the CD. Read it, listen to it, love it.

[Edited to Add: After some more thought, I think I’d lower this to a four star review – it is a terrific audio recording, but I don’t know if it would be quite as funny on paper. And there were a few parts that dragged a bit.]