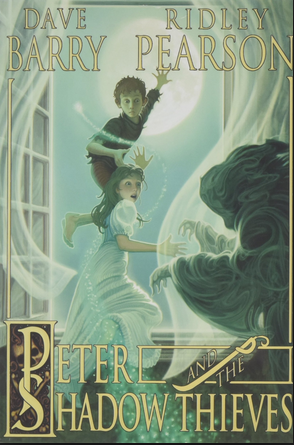 After reserving Peter and the Shadow Thieves at the library and finally picking it up, it sat on my bookshelf for days. But, once I finally managed to open it up and start, I finished it within a day and a half. It was just a plain fun book.

peter and the shadow thieves

Peter and the Shadow Thieves begins back in Neverland, the island where Peter and the Lost Boys have chosen to live, where the pirates are marooned, and the Indians protect the boys from the pirates, thanks to Peter’s saving of the chief in the previous book, Peter and the Starcatchers. Peter has taken up taunting the pirates, thanks to his ability to fly and despite the repeated warnings from the Indian chief to cease such dangerous pastimes. The other boys don’t come along on these excursions very often, seeing as they can’t fly and the hike to the other side of the island is difficult. But James, Peter’s favorite and most-trusted of the Lost Boys, gets tired of being left behind, and takes off after Peter, managing to get himself caught by the pirates in the process. Captain Hook (renamed by Peter) is determined to catch Peter and figures he can use James as bait. With the help of the Indians and the mermaids, Peter manages to rescue James, but, while they are doing so, a boat appears on the coast and a group of strangers undock.

Of course, in any book of fantasy that includes magic powers, pirates, and “Others,” you can rightly assume that whomever is on that boat is no friend to Peter and company. The boat contains a character from Peter and the Starcatchers who watched all the events transpire and escaped in order to tell the “Others” (those who will stop at nothing to get their hands on the Starstuff). Now he is leading a ship back to the island in order to recapture it, and on that ship is a passenger who gives all the crew nightmares; he seems to have no face and when he is present, the whole place goes cold.

The frightening passenger, named Lord Ombra, demands that they wait until full darkness to get off the boat, which certainly scares the pants off the crew, especially when he refuses to tell them what the plan is. They kidnap the Chief’s daughter and then Ombra does something with the Chief’s shadow, allowing him to read the Chief’s mind, where he discovers that the starstuff was returned to England with Molly’s father, Leonard.

Peter, who is hovering in the trees, sees both the shadow manipulation and hears their horrible plan to go kidnap Molly and hold her ransom for the starstuff. Desperate to save Molly, Peter leaves James in charge of the Lost Boys and flies off toward England with TinkerBell in tow. Of course, one can’t just FLY to England, and he is forced to land on the ship, hiding in the sails and sneaking food by night when possible. And then, when he arrives in England, he needs to find Molly.

I really liked the Peter and the Starcatchers, but Peter and the Shadow Thieves was even better. The plot was tighter (and quite unpredictable), the characters more developed, and the story just raced along. The bad guys were scarier to me than the previous ones, and the situation was both more fantastic and more desperate than the last book. I loved that George Darling was introduced into the story. I literally could hardly put this book down – I was so anxious to see what was going to happen next.

Peter and the Shadow Thieves is, however, fairly dark and scary (of course, I’m also a total wimp). I wouldn’t read it as a nine-year-old, that’s for sure. But get a bit older than that, and I think just about anyone would really enjoy this story.

If you liked this review of peter and the shadow thieves, you might also like these books: