Last year, after all my big talk about reading the entire Massachusetts Children’s Book Award list, I only ended up reading 12 of the 25.

But this year! I have big plans for myself. I am hoping to read them all. Yes! Every single last one! (Mainly by listening to them on CD when my baby won’t sleep in the dead of night, probably, but whatever). Also, this year I have the advantage of having read seven of them already. Much better than last year when I’d read a total of one before seeing the list. 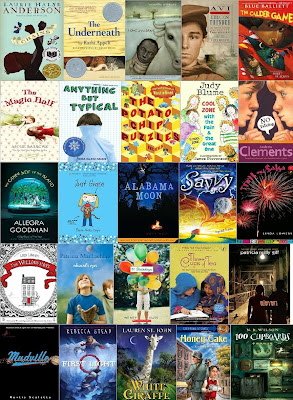 The Underneath by Kathie Appelt
Home of the Brave by Katherine Applegate
Iron Thunder by Avi
The Calder Game by Blue Balliett
The Magic Half by Annie Barrows
Anything But Typical by Nora Baskin
The Potato Chip Puzzles: The Puzzling World of Winston Breen by Eric Berlin
Cool Zone with the Pain and the Great One by Judy Blume

No Talking! by Andrew Clements
The Other Side of the Island by Allegra Goodman

Savvy by Ingrid Law
Truth and Salsa by Linda Lowery

Any suggestions or thoughts on some of these titles? Last year you guys were great about steering me toward the good ones!