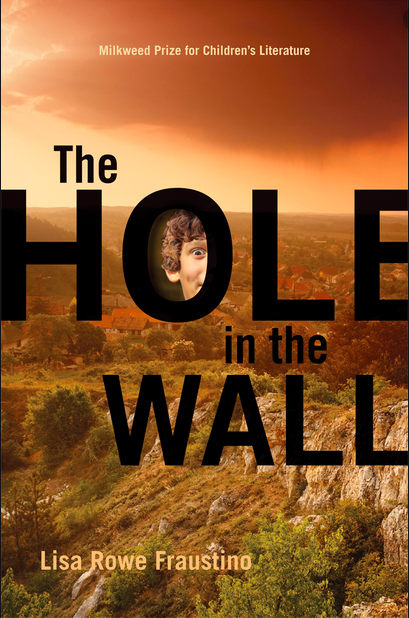 6 of 10: I’ve already given the award for Most Bizarre Book of the Year to Amy’s Eyes, but The Hole in the Wall certainly does make a valiant effort. At the end, I’m still not all that clear on what it was all about.

In library school, it would be nearly impossible to graduate without hearing about Ranganathan’s five laws. I won’t bore you with them all, but one of them is “every book its reader.” Meaning, of course, that every book will appeal to SOMEONE.

Whenever I hear this, I think of Louis Sachar’s Sideways Stories from Wayside School. My two lovely sisters ADORED these books. I? could hardly get through them. They were just so WEIRD (a rat dressed in a bunch of rain coats so he can pass for a kid? Weird). And I have noticed that my tolerance for weirdness in books tends to be quite low.

Which is all to say, if you like books with a high dose of the weird, you’ll probably like The Hole in the Wall by Lisa Rowe Fraustino. If you are like me and cannot get behind rats in raincoats, you may want to pass.

The Hole in the Wall by Lisa Rowe Fraustino

Sebby is the main character, living with his family in fairly abject poverty. His dad has become an alcoholic (for reasons that I didn’t ever catch) and his older brother ran away from home months earlier. The town they live in is being bought up, chunk by chunk by some “local boy makes good” type but everyone is a little distrustful of what he’s using the land for (some sort of mega-secret mining project).

As if Sebby doesn’t have enough on his mind, suddenly things get super weird, what with the chickens disappearing, his stomach becoming hard as a rock (and also, strangely magnetic), and colors coming out of the wall. And he’s pretty sure they’re all tied together. And he’s even more sure he wants to find out how they all relate.

The book started out quite slowly for me, mainly because everything was so weird, but the last twenty pages, I suddenly found myself quite enjoying the book. The characters are likable and real (well, as real as a guy who is magnetically attracting chickens to his stomach can be) and you want things to turn out well for them. Plus, the revelations at the end are surprisingly fun and appealing. But it was kind of a long walk to get there.

This book reminded me a little of Scumble (the companion book to Savvy), with it’s modern and yet timeless setting, in a unspecified location. I sometimes find this a little unnerving – it’s hard to focus as much on the characters and the story when my mind is darting around trying to find somewhere to LOCATE this story.

Mainly, I felt like the oddness of this book by Lisa Rowe Fraustino kept me from connecting enough with the characters to really care enough about what happened to them. And so many of the characters had too little back story, like his friends who mysteriously disappear or why the father turned into an alcoholic.

Yes, I’m afraid The Hole in the Wall was just a little too bizarre for me.

If you liked this review of the hole in the wall by lisa rowe fraustino, you might also like these books: