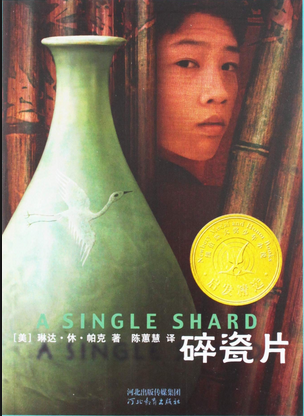 I had never heard of A Single Shard. Perhaps you haven’t either. We both should have; it’s a fantastic book, and definitely one of my favorite Newbery’s I’ve read this year. It’s only a few years old, which surprised me. The tone and themes of the book made me assume it was a much older book.

Set in 12th century Korea, Tree-ear is an orphan boy who lives under the bridge with an old crippled man named “Crane-man.” They are extremely poor and mostly scavenge for food, both in the woods and in the village refuse. The village they live in is known for its celadon pottery (pottery with a greenish/gray glaze). The best potter in the village is Min, and Tree-ear loves to watch him throw pots on the wheel. Min works the slowest; rejecting pot after pot, even if they have no visible flaws, and making only one pot for the other potters’ five or six.

One evening, through a series of mishaps, Tree-ear breaks a set of pots that Min has made and, after facing the furious potter, agrees to work for nine days to repay the damages. He has high hopes of getting to throw pots, but alas, he’s instead to spend the long days cutting wood for the kiln. Not too thrilling. After his nine days are up, Tree-ear offers to work for the potter full-time; Min has no assistant like the other potters and he is getting old enough that it is hard for him to do it all alone. In exchange for his labors, Tree-ear will receive a daily meal.

This arrangement greatly improves Tree-ear’s life. Every afternoon, he gets a delicious lunch, of which he eats only half. He then hides the remainder and takes it home to Crane-man to have for dinner. After a day or two, however, whenever he returns to get his hidden lunch bowl, he finds it completely refilled, which he soon discovers is thanks to Min’s wife. Gradually, Tree-ear’s tasks get more involved; he is allowed to dig the clay for the pots and even help load the kiln.

And then, from China, comes an embassy, looking for a potter upon whom to bestow a royal commission. That potter will make pottery solely for the king and must be the best potter that can be found. Tree-ear knows that this is Min’s life long ambition and that, since a commission is for life and new commissions are given out only every few decades, this is Min’s only chance. Will he get it? (I know, and you don’t. But if you read the book, we’ll both know).

In A Single Shard, the character development is rich and subtle. Tree-ear is a completely real boy (well, I’ve never actually been a boy, but it seemed pretty real to me); he is thrilled by new responsibilities and then grumbles about the labor involved. He volunteers to make a journey and then is terrified by the prospects of leaving everything he’s ever known. Min and his wife are wonderfully round characters, with just enough history to help the reader understand why they act as they do.

The story line in A Single Shard, while simple, is not necessarily predictable; it doesn’t have that cookie cutter feel that so many adolescent books have (kid has no friends, feels alone; something happens; everything is better).

This book really is just spectacularly written. I listened to to it on CD in the car and finished it in about three days. There was nothing I didn’t like about A Single Shard; nothing that would make me amend my recommendation (“it’s all great except for this one section. . . “).