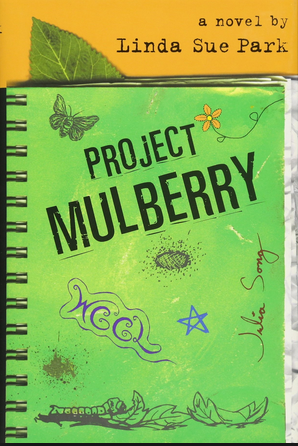 Whew, I’ve been reading a LOT lately and doing a poor job of writing about the books I finish. I do enjoy writing about what I’m reading because I feel like I remember the books quite a lot better if I’ve sat down and processed them a bit. Hopefully you’re not bored to tears by these posts (crying makes me uncomfortable).

I read and loved A Single Shard earlier this year. I would never have picked it up if it hadn’t been a Newbery book, since I’d never even heard of Linda Sue Park. Now, I’d consider her among my favorite recent authors. And she was so funny and sweet at the Texas Book Festival, I just wanted to take her home in my pocket.

Anyway, I picked up another of her books (Project Mulberry) at the library last week and read it in just a few hours. It’s probably her most well-known book after A Single Shard (the library had at least five copies of the books), having won a number of awards.

Julia and Patrick have been friends ever since Patrick was the first kid not to be appalled by the heavy scent of kimchi (pickled cabbage) that hung in Julia’s house. The two have worked together on their homework and extra-curricular activities for years. They’ve recently joined the “Wiggle Club” (stands for Work-Grow-Learn-Live) where they are to do some project to enter in the state fair. Both of them want to do something in the Animal Husbandry category but both of their parents are fairly against them bringing smelly dirty animals into the house (they live in condos, so there isn’t really a yard, either).

Then, Julia’s mom suggests raising silk worms – her mother had raised her own and harvested the silk threads when she was a young girl in Korea. Patrick loves the idea and discovers that they can order them online at a fairly low cost. Julia, on the other hand, hates the idea. It seems . . .too Korean. She wants to do something really American for the state fair. Maybe make some apple pies?

Fortunately for Julia, there is a snag in the plan – silk worms eat mulberry leaves and mulberry trees aren’t exactly in great abundance in Illinois. Maybe they’ll have to give up on the plan altogether and do something nice and American-y.

Patrick, not to be dissuaded, posts signs all over town asking if anyone has a mulberry tree. And, much to Julia’s horror, someone does. Now she has to pretend to be excited about it while simultaneously figuring out a way to sabotage the plan and force them to figure out something less Korean.

There are some other really lovely parts of the plot besides the worms that really flesh out both the characters and the story itself – Julie and Patrick’s search for all of the new U.S. State quarters, Julie’s relationship with her brother, and various facets of racism (the man who owns the mulberry tree turns out to be black and he, in turn, is surprised to discover that Julia is Asian and then assumes she is Chinese).

I was particularly pleased that the racism elements didn’t feel pushed or an attempt to make the book about “Important Issues.” They just naturally arose from the story line.

In addition to a quick-moving plot and excellent characters, Park has inserted a page or two of dialogue between Julia and herself after each chapter. Julia asks questions about how the plot is developing and requests that her annoying little brother be swapped out for a worshipful younger sister (denied). It’s fun to hear a little bit more about how the story developed and how Park writes her books.

Project Mulberry is an excellent book (although not quite as fabulous as A Single Shard) and one I’d recommend to anyone who enjoys reading. I can’t wait to read more of her books.