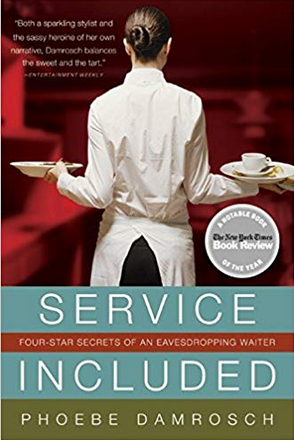 I have a deep affection for memoirs and “tell-all” books. When I saw Service Included: Four-Star Secrets of an Eavesdropping Waiter

on the list from the 2007 Texas Book Festival, I was determined to get my hands on it. Fortunately, my library had ordered a copy (all praise the library – they seriously have almost everything!). It took several months to actually arrive, get processed, and end up on the shelf, but arrive it finally did, and I have now read it (and in about 24 hours; it’s a quick read).

Phoebe gives a brief background about herself and her entrance into the restaurant world – she got a waitressing job after graduating from graduate school so she could make some money while writing. She quickly grew interested in the restaurant scene and, hearing that Thomas Keller of the acclaimed “French Laundry” would be opening a restaurant called “Per Se” in New York City, landed herself an interview and then a job.

At this point, the world of food and dining became her real life, while writing became something she told her skeptical family she was really doing. She quickly rose though the ranks, becoming one of only two female captains (the position above the waiter – they are responsible for explaining the menu, checking on the tables, and being more of a hostess/friend to the guests rather than running back and forth with food) in a four-star restaurant in New York City.

Per Se is an extraordinarily high-class establishment and the food and atmosphere are almost unreal. The idea of paying triple digits for an appetizer is mind-boggling to me, of course, but not really out of the ordinarily there. A $20,000 dinner for two? Right this way, sir.

In Service Included, she does a good job alternating between her personal life and the ongoing development of the restaurant. Eventually, though, she begins dating one of the managers at the restaurant (which is sort of against the rules) and the story turns more toward their relationship and the vast amount of dining they do (from greasy little diners to unbelievably upscale restaurants). After about a year and a half, she decides to leave Per Se and write a book. As she’s developed her relationship, the restaurant scene has become less all-consuming and she is ready to move on.

For me, the key to a good memoir is a likable person and Phoebe is (to me at least) intensely likable. I found her interesting and funny, with a talent for weaving detailed descriptions of her tasks, the food, or certain preparations into a narrative that stayed snappy for 200 pages.

Service Included is not the best book I’ve ever read or one I’ll return to again and again, but it was a fun book and I learned a lot about food and high-class restaurants. I certainly would recommend it to anyone interested in food and dining.