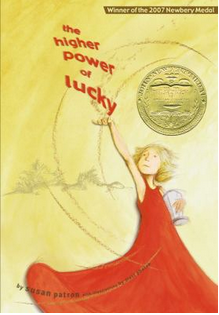 I got The Higher Power of Lucky on CD a few weeks ago and listened to it at the gym. It’s hard for me to listen to some books there, because if they don’t grab my attention right away, I find myself zoning out, watching other folks at the gym, or just wondering how much longer it is until I can get off the treadmill. I did, however, manage to get all the way through this one. And, although it wasn’t a great book, by any means, it was engaging enough for me to concentrate on.

the higher power of lucky

The Higher Power of Lucky starts with Lucky, who is a 10 year-old girl who lives in the tiny town of Hardpan in California. She lives with her guardian, Brigitte, who is her father’s ex-wife. The reason for this complicated set of circumstances is that, two years previously, Lucky’s mother touched an electric wire after a storm and died. Lucky’s father, who she has never met, and is absent for reasons that are never explained, calls his ex-wife in France, Brigitte, and asks her to come care for Lucky. Lucky is constantly worried that Brigitte will get tired of caring for her, and will decide to return to France.

Lucky spends her time with Lincoln, a boy about her age who is obsessed with knot-tying, and Miles, a five year old boy who is constantly on the lookout for cookies (need I mention that I identified most closely with Miles?). When she isn’t with them she’s working cleaning up between various Anonymous meetings (the smokers hate seeing the butts left over from the alcoholics group who hate seeing the beer cans left over from the over eaters who don’t like the candy wrappers left from the smokers, etc), and listening to the stories about how they hit “rock bottom” and then found their “higher power.” Lucky is constantly on the lookout for her own higher power. Frankly, if she ever found it, I can’t remember what it was.

I didn’t really like the feel of this book – it sort of had that washed out, dreary, dusty quality to it, and I don’t care for that at all. Even when you’re dealing with topics like abandonment, death of loved ones, etc, I think you can do so without making it so bleak. Still, I’ve clearly just admitted that it did indeed create a very defined and real setting for me, even if it was one I didn’t care for.

Overall, I just can’t understand why this book won the Newbery, unless it was a sad year for children’s lit. I just started listening to another Newbery book, A Wrinkle in Time,” and in the introduction, the author comments that adults don’t understand this book, but children “get it.” I feel like this book is the exact opposite; I’m sure some adults felt like it was deep and meaningful and rich, but I suspect many children will find it a bit dull and depressing. Also, I found The Higher Power of Lucky to be a bit of a paradox in that it seemed like an adult message with a childishly simple (and often hole-filled) plot.

It’s certainly not a book I would recommend to my brother or any other kid that was the recommended age. It just wasn’t that great and it certainly wasn’t memorable. I’ve read Newbery’s that moved me to tears, like Bridge to Terabithia and Walk Two Moons. I’ve read ones that I thought about for weeks afterwards, like The Giver. I’ve read ones that just charmed the socks off of me, like Caddie Woodlawn. The Higher Power of Lucky did none of these for me. It will likely be most remembered for the wild publicity and protests that the inclusion of the word “scrotum” caused.

On a little side note, sometimes books have lines in them that I think of over and over again; sometimes it’s because the line is hilarious, sometimes because it’s so stupid, sometimes because it’s so poignant. The line that has replayed in my mind because of this book is just silly. Lincoln comments to Lucky that her eyebrows look different. She replies: “It’s a new beauty product; I put mineral oil on them. It’s for glistening.” In the week or two since I finished the book, I have thought of that line probably a hundred times; “it’s for glistening.” Who knows why? And, no, I have not taken that up as part of my beauty routine.

If you liked this review of the higher power of lucky, you might also like these books: