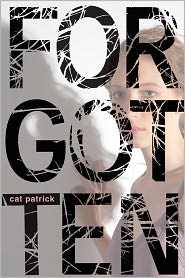 I love a book with a great premise that makes me think, “How clever was that?” Where things are really quite well-thought out and the whole idea is solid. I felt like Delirium did that quite nicely. Delirium is on a large scale, though, and it doesn’t have to be a grandiose new world for me to love it. It can be just a small twist like Half Magic (one of my all-time favorite books from my childhood) or Ella Enchanted.

Forgotten by Cat Patrick. . . didn’t quite work that way. The premise of this book fell apart the minute I paid any attention to it. And that’s unfortunate.

The concept is that London’s memory functions backward. She wakes up every morning forgetting the past, but she remembers the future (so, for instance, she recognizes her mother, not because she remembers her from the days or weeks or years before, but because she can see her in her life in the future).

She writes herself notes every night so she can review them in the morning, reminding herself of interactions she had the previous day and ensuring she doesn’t re-wear the same clothes (seriously, I think that might be the least of your problems).

Things get more weird when she meets this new guy who she has no future memory of at all. How is it possible that she won’t even see him one more time at school?

And then she begins having these bizarre visions/memories that she has no context for.

I told Bart about Forgotten over lunch, and he proceeded to ask me tons of questions about how it worked and holes he saw in the theory (Bart is really good at the “poking-holes-in-theories” thing). Later, when I finished the book, we spent an embarrassing amount of time talking about how ludicrous the idea was.

While I was reading it, I could kind of gloss over how it didn’t work very well, but the minute I closed the book, all I could think about were the issues.  They were practically punching me in the face.

Take, for example, the notes she writes herself. After a couple of years, you would spend ALL your time reviewing notes just to keep your head above water. Not to mention that, in a relationship (which is exactly where London finds herself), you could not cram fast enough to try and fake 6 months worth of time together in a single afternoon.

And how could you possibly get through school? There is no way my memory of the future would be enough to get me through tests I couldn’t study for.

There are so many other problems with this premise that I can’t rant on about without completely ruining the story, but suffice it to say, there are many. Also, perhaps I should get a life instead of picking a fake scenario to pieces. Nah, I’ll get a life tomorrow.

My problems with the logistics of the story aside, the plot itself seemed to move quite slowly for a book that had so much going on. Every time she remet her boyfriend, there was the another “oh my heavens, he is SO gorgeous” paragraph.