You’re closing the gap to one year so fast!

This month your skill set has just exploded. You clap and wave and stick out your tongue on demand. And, your dad’s favorite, if we say, “what the hey?” to you, you shrug your shoulders and hold your little arms up in a I-have-no-idea gesture.

You’ve started standing unassisted as well, and have even taken a few steps here and there, but no real walking yet. We can wait a little while more, especially since you don’t really own any shoes and I’ll have to remedy that once you’re toddling around.

This week you figured out the pointing concept. A few months ago, we hung five photos of you in your bedroom and now every time we’re in there, you point at them, not happy until we’ve picked you up and let you look closely at them. I can’t blame you – where else can you find such a beautiful baby? And we’re running through bananas like they’re going out of style, since we keep them on the counter and you can see them from your high chair. You can’t stop pointing at them!

Also, you can’t smile anymore without wrinkling your nose. Everywhere we go, people comment on it. Sometimes, if you have your pacifier in, it’s hard to tell you’re smiling and people think you’re giving them the evil eye. It’s pretty darling, though, and I’ll be sad when you outgrow it.

Three weeks ago, I started taking you to storytime at the library and you love it. And when they bring out the toys for the last ten minutes? You forget I even exist and crawl over to the bins and start pulling toys out as fast as you can. It messes with your nap a little bit, but it’s a sacrifice I’m willing to make because you really have a good time and it’s nice to get out of the house.

Speaking of getting out of the house, there is a dog park nearby and most mornings, before it gets too hot, we walk down there and stand up against the gate, so you can watch the dogs run around. You love the dogs and will quietly watch them for ten or fifteen minutes until I make the executive decision to leave because my legs don’t want to stand up anymore.

By the way, I’m sorry about your hair. It’s at an awkward stage and I have no idea what to do about that. I apologize that you have to go out in public looking semi-homeless most days. I promise to braid it or put it in pigtails when it’s long enough to do something with.

I never would have believed children as young as you could have such strong personalities, such obvious opinions about things, and be so clear about what they want. You’ve proved me wrong, and I’m happy to be wrong. 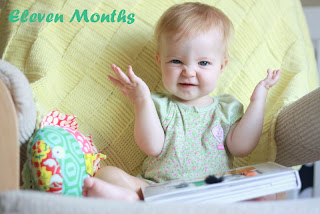 “What the hey?”, the wrinkly nose, and homeless hair all in one photo
0 shares