You got sick for the first time this month (happily it only lasted about a day and a half). In the middle of the night, I woke up and heard you making a few little noises. Normally, I don’t go in to your room during the night, but I thought I’d better check on you, since you were sick and all. When you saw me, you started beaming, waving your arms and legs frantically, all excited that I was there. Too bad it was around midnight, and there was not a chance I was getting you out of bed to play. It was darling, though.

We have a swing someone lent us that looks directly at the front door. We rarely use it, but on Monday I stuck you in there while I was making lunch, and when your dad walked in the door, I thought you were going to launch yourself right out of the chair, you were going so nuts, waving your arms around and making that screeching eel sound you do whenever you’re really excited about something.

You are just so in love with your dad these days. This morning, while he was ironing his shirt for work, you were sitting up on the bed with me and you rotated your head around as far as you could to watch him. He was facing the other way but every minute or two he would turn around and smile at you. Your face lit up every single time and then you’d just stare at the back of his head until he turned around again. Even when I tried talking to you, you wouldn’t look away from him. You’re more than welcome, little one, for giving you such a great dad.

Generally, you are really easy going but, whoa boy, are you afraid of the vacuum. Last week, you were sitting in the living room with your back to me and I turned on the vacuum. I couldn’t hear you crying over the roar, but when I looked back at you, I could see your teeny shoulders shaking with sobs. Pretty much broke my heart in half, right there.

Those shoulders aren’t QUITE so teeny anymore, though, since you managed to pack on eleven ounces in the last month. That still lands you in the lowest percentile categories, but it’s nice to know you’re growing. You didn’t even cry when they stuck your toe for a hemoglobin check. And for the first time you wore a dress to the doctor’s office and for the first time, no one called you a boy. Statistics would say that is correlation, but not necessarily causation without further testing. I beg to differ.

Little girl, we love you so much,
Mama 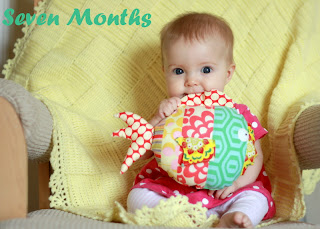 Previous Post: « Duck! Rabbit! by Amy Krouse Rosenthal and Tom Lichtenheld
Next Post: Tell Me What to Read: Round 18 »