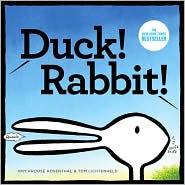 Duck! Rabbit! was one of those books that none of the kids at my schools last year had ever heard of, but once I read it to them, I never saw it checked in again until June.

This Duck Rabbit book shows the duck/rabbit on each page, with one off-screen person declaring that it most certainly is a DUCK, while the other insists it is clearly, obviously, definitely a rabbit.

The book goes through a variety of scenarios where each narrator tries to convince the other that, see, it’s certainly the animal they are convinced it is.

When I would read Duck Rabbit book to a class, I would cover the top half of the cover with a piece of paper so the title was hidden and only the image was visible. I’d tell them to not say anything, but to think of what animal this was. Then I’d say, “Raise your hand if you think this animal is a rabbit.” Around half the kids would raise their hands and then the other half would look at them incredulously. Then I’d ask the group that thought it was a duck to raise their hands and they’d feel vindicated that they weren’t the only ones who didn’t see a rabbit.  Ah, the hilarity.

You can watch part of the book in this cute little video:

This book is already sitting in Ella’s closet, waiting for her first birthday.