Long ago, my family lived in Wisconsin. One of my parents’ good friends was a professional photographer and in his studio, he had a photograph of a couple and their two young boys in formal attire out in a field with a full dining table. My parents thought this was spectacular and talked for years about recreating it.

Then, in 1998, my grandparents, who also lived in Wisconsin, announced that they were moving away and my parents decided that if they were going to do this picture, now was the time. And so, on our last visit to my grandparents’ Wisconsin home, we took this photograph: 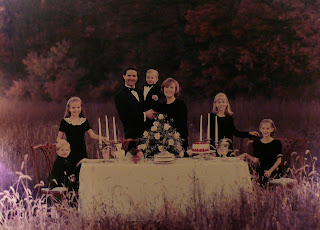 Because of rain, we ended up taking this picture at around six a.m. The ground was incredibly muddy and it was freezing cold outside. A very large copy of this picture has hung in my parents’ dining room for the last twelve years.

Soon after this picture was taken, my dad mentioned how fun it would be to recreate the picture ten years down the road, with us all grown up. Possibly, there would even be some spouses and grandbabies.

But then this past fall, everyone was going to be together in Austin for Ella’s baby blessing. And it was determined that this would be the moment the photo was recreated.

The amount of effort that went in to making this happen was insane. Ralphie (who took the new rendition of the photograph) spent tons of time scoping out a spot. My grannie mailed the dishes that we’d used from her house for the 1998 photo to my apartment in Texas. Another friend lent us the chairs, tablecloth and goblets. We rented tuxedos, borrowed the table from the church, and ordered the flowers and the cake.

Once again, we took the photo early in the morning. We had a procession of two mini-vans and a car. This time it was blazing hot. When we opened the cake box, all the frosting had melted and Merrick had to use baby wipes to get the strawberries looking decent again.

The husbands kept the wee babies in the air-conditioned car, dashing out every time the cloud cover came over, then racing back to the car.

All the girls were wearing knee high soccer socks in a (successful) attempt to avoid chiggers and red ants.

But, in the end, this photograph now hangs in my parents’ dining room: 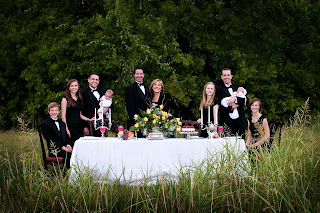