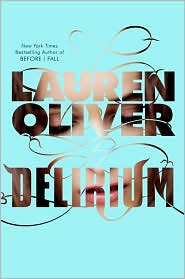 8 of 10: Delirium stands out in the world of dystopian trilogies with an intriguing premise and really excellent writing.

At ALA Midwinter in Boston last January, one of the heavily promoted titles was Lauren Oliver’s debut Before I Fall. I picked up a copy of it, intrigued by the Groundhog Day-ish premise and read it within a week or two. I . . . did not love it. The characters were so horrendously unlikeable, the book really dragged in the middle, and the ending fell flat for me.

Which is why I was leery of reading her second, MUCH-hyped (it was optioned back in JUNE) book, Delirium. But, on the other hand, it was dystopian novel. And I cannot resist the siren call of a dystopian novel. Even in a year crowded with dystopian novels. Even when it’s the first book in another trilogy.

And then Kelly, who also didn’t swoon for Before I Fall, got a copy of Delirium by Lauren Oliver and really loved it and sent me her copy. And, what do you know? I loved it too.

The story takes place in Portland, which is surrounded by a mega-electric fence. All the cities left in the United States are the coastal cities and each one is completely locked down – no one goes in or out. The interior the continent is left barren, after the Great Sanitation.

See, love (also known as the delirium) has been declared a disease for which, thank goodness, a cure has been found. When you reach 18, you have “the procedure” done (part of your brain is zapped out) and you no longer have to worry about contracting the deadly disease. They can’t do the procedure before the age of 18 because people tend to have serious side effects, including death. But until you are 18, everything is segregated, so the likelihood of contracting the disease is low.

The Great Sanitation cleared out everyone who hadn’t submitted to the procedure and moved into the cities. There are rumors that some people, called Invalids, still live out in the wilds and don’t believe love is actually a disease, but the government says that they’ve all died off because of the disease and there is no one out there anymore. And no one really questions it anyway.

Of course, there are other problems that come along with the cure, like the fact that parents don’t tend to be quite as nurturing and protective of their children because they aren’t capable of loving them, but the government has a lot of regulations about caring for a child and so it generally goes pretty smoothly.

The government spends a lot of time, too, getting rid of Sympathizers, those who secretly don’t really care for the procedure or want to escape. They are either killed or locked away in a giant prison called the Crypt. Even the rumor that you’re a sympathizer is enough to get you and your family fired from your jobs, expelled from school, and kicked out of your house. Basically, you toe the line.

Lena is just a few months away from the procedure and she is counting down the days eagerly. The disease killed her mother, who committed suicide because of it, and her older sister contracted it and ended up having the procedure against her will a few months early (happily, she’s now completely cured, married to her assigned pair with children, and living peacefully). Lena still acutely feels the heartache of losing her mother and has been told by her sister and aunt that after the procedure, she won’t feel that pain any longer – it will all seem a distant memory to her.

The idea of losing that pain is unbelievably appealing, even though it will mean she no longer will feel the strong bonds of friendship with Hana, her closest friend.

And then, as the procedure approaches, Lena accidentally falls in love. And now, like everything she’s ever read about the disease predicted, she can’t think clearly, she loses her feelings of self-preservation, and she has clearly contracted the delirium. And she doesn’t even care.

Lena is such an excellent character – sometimes weak, sometimes strong, sometimes brave, sometimes terribly frightened. When she falls in love, she acts the way people in love do. Her friendships, her family relationships are all very very realistic. I can’t say that I really loved Lena but she is exactly the right character to explore this world through.

It’s been mentioned before and it’ll keep getting mentioned – the writing in Delirium by Lauren Oliver is really excellent. It’s almost hard to read because I kept wanting to race ahead to see what was going to happen, but I also didn’t want to miss any of the writing. What a terrible problem to have. . .

I loved how well-thought out the world in this book was – how a world without love really would function. It’s not really full of hate, more just indifference. People just float through their lives, feeling no real joy and no real pain. Little things like how parents raise their children without love are mentioned in passing, just briefly enough to flesh out the setting and make it more realistic; you get the sense the author thought a lot about these issues as she wrote the book, rather than just thinking “Ah-ha! A world without love. And go!” And I appreciate that in an author.

Kimberly mentioned that this book reminded her of The Giver, but it reminded me far more strongly of Scott Westerfeld’s Uglies series (when I told Bart the premise, he agreed), although I can see similarities to The Giver.

If you’re a fan of either book, then Delirium by Lauren Oliver is almost certainly one you’ll enjoy.

ARC received from Kelly of Stacked