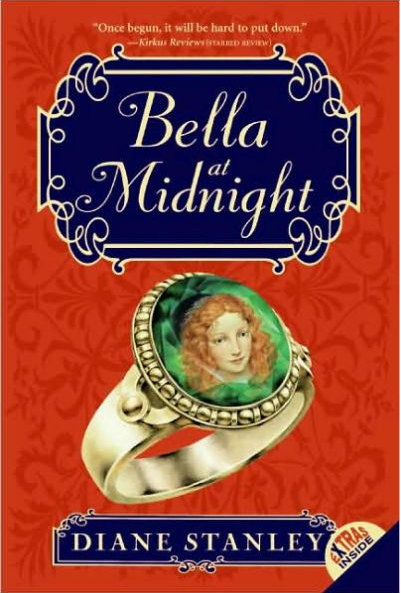 I first heard about the Texas Blue Bonnet Award when my in-laws gave me The Goose Girl last year and the back mentioned it was a Texas Blue Bonnet Book. I looked into it a bit, but never quite understood how the system worked.

It turns out that the Texas Blue Bonnet Book list is put out every year – the 20 or so books on the list are chosen by a committee from nominations that can be made by an Texas librarian, teacher, student, or parent. Once the list is published, libraries and schools can purchase the books and encourage students to read them. The books must be by a U.S. author and published in the last three years. The books can be of any genre and either fiction or non-fiction. The tag line is “Read Five and Decide.” Students are encouraged to read five of the books (any five) and then vote for their favorite one. At the end of the year, the book with most votes is bestowed the Texas Blue Bonnet Book Award.

Anyway, Bella at Midnight by Diane Stanley was one I picked off the shelf basically at random. I’d never heard of the author or the title. It’s touted as a “Cinderella story” but it’s only marginally so.

Bella is born to a knight and his wife; unfortunately, the wife dies within a day of Bella’s birth and Bella’s father (Edward) demands that the child be taken away, for he cannot bare to see her. Bella’s aunt, Maud, takes her to the home of a blacksmith in a nearby town; the blacksmith’s wife has just finished acting as a wet nurse to Prince Julian who lives with his uncle at the castle in the village, and she agrees to take in Bella.

It soon becomes clear, though, that Edward has no intentions of ever coming for Bella, even after she no longer requires a wet nurse and so the Blacksmith’s family raise Bella as their own, never telling her that she is not really their daughter. Bella grows up happy and loved, and develops a close friendship with Prince Julian who often comes down to visit the family and play with Bella and her older “brother,” William.

The kingdom, however, is at war with the neighboring kingdom, and several times raiding and burning parties come through and level the village while the villagers gather in the palace for protection. Finally, though, the Hundred Year War comes to an end and a treaty is signed. Part of the treaty is that Prince Julian will go live in the court of the former enemy. He leaves just after an unfortunate incident between himself and Bella where he publicly snubs her for fear of being ridiculed by his friend. He is horrified by his behavior, but has no opportunity to make things right before he is whisked off to the other kingdom.

The story’s focus switches to a woman and her two daughters. Her husband has been lost at sea, and all their riches lost. In desperation, she marries Edward who now sends for the Blacksmith’s family and demands his daughter be returned. Bella is horrified to find that her “family” is not really her family and that her father is cold and perhaps a bit mad. Her new step-family is equally unkind to her and she retreats to the kitchens where she works with the cook (having grown up in a working family, she is more used to servant’s labor than genteel living, after all).

Then, one day the older step-sister returns from her position as queen’s attendant at court and gleefully informs her mother that the queen and king are not speaking because the king has decided to attack the former enemy (and break the treaty between them) in order to expand his holdings and make a great name for himself. Of course, since Julian is stationed at the palace, it’s likely he’ll be a casualty. But no matter – there is glory and riches to be had. What is one little brother in the grand scheme of things?

Bella is horrified and determines to travel to the other kingdom and warn Julian. Despite his brief unkindness to her (and her fear that he never really cared for her, but only thought her a silly peasant girl), she feels certain she must at least attempt the journey.

I thoroughly enjoyed this Bella at Midnight by Diane Stanley – the writing was excellent (it reminded me of Shannon Hale) and the plot moved right along with enough twists and turns to keep you guessing.

The book also has multiple narrators – nearly every character is given a chapter in which to tell a bit of the story from their own view. I think in some books this would be distracting, but it worked really well in this book, I thought.

Additionally, this book is quite religious. Again, in some books this might have made me uncomfortable, but Diane Stanley handled it very deftly. It didn’t seem overt or out of place, but easily it in the flow of the story. Even if you weren’t religious, I don’t think it would be bothersome as a reader.

Anyway, Bella at Midnight is a great book, and I’m pleased to see that Diane Stanley has written a number of other books.

If you liked this review of bella at midnight by diane stanley, you might also like these books: