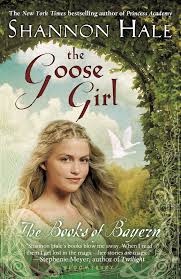 One of my goals for 2007 was to read a book a week and write about each book here. We shall see how this goes.

The Goose Girl was an excellent book, and I’m glad to have started the year out with a book I enjoyed so much. My in-laws sent me this book for my birthday, which was way back in September and it’s clearly taken me a while to get to it. I read about eight chapters in December and then, in the shuffle of Christmas and New Years, I didn’t get back to it. On Monday night I picked it up again and finished it on Tuesday. It really was that good.

From reading the back cover, it appears that this is a Brothers Grimm story, although I’m not at all familiar with the basic storyline. This book reminded me of something by Robin McKinley (her Beauty is one of my favorite books of all time), but because there is no Disney version I had no idea where the plot was heading or what elements were original and which were Hale’s own inventions.

The Goose Girl by Shannon Hale

The Goose Girl follows Ani, the crown princess of the fictional kingdom Kildenree, who has known since birth that it was her destiny to become queen. Her mother, the queen, is the epitome of regal, while Ani struggles with her shyness and affinity for nature and animals (this affinity is deeply frowned upon by her mother). Still, despite her natural inclination away from this life, Ani works hard to become the kind of person a future queen ought to be.

Then, at a royal ceremony, the queen, in a most off-handed manner, refers to Ani’s younger brother as the “crown prince.” Ani is shocked and, several weeks later, works up the courage to confront her mother about this slip of the tongue.

To her dismay, her mother tells her that she has betrothed Ani to a prince of the neighboring kingdom, Bayern, in order to prevent a war which would surely destroy the tiny Kildenree. Ani should be thrilled by this news, the mother reasons. After all, she has always struggled to be queenly material and this arrangement will let her off the hook.

Ani, however, feels betrayed, particularly after all the hard work she has put into becoming like her mother. But, off she and her entourage go, chief among them Ani’s lifelong friend and lady-in-waiting, Selia. And here, in the several month trek to Bayern, is where things go terribly wrong.

Selia, a lovely and very poised young woman, does not care much for the duties of a lady-in-waiting and wants Ani’s position for herself (this is magnified by her feelings that Ani does not appreciate how fortunate she is to be royalty). Selia convinces most of the guard to turn on Ani and her few faithful guards and Ani is forced to flee into the woods for her life. Ani certainly knows what Selia’s plans are: arrive in Bayern as if she is Ani, marry the crown prince, and live a life of luxury as the queen of this foreign country. Ani, alone in Bayern, with no friends, no money, and no skills – nothing but an impossibly fantastic story – now has to discover how to regain her rightful title and dispose of the imposter. The story holds together remarkably well, never losing momentum, and introducing a set of varied and wonderful characters. The climax is wonderful – supremely satisfying, even if parts of it are not entirely unanticipated.

The plot is certainly basic enough fairy-tale material, but Hale makes it into something really wonderful in The Goose Girl. I haven’t enjoyed a book as much as I did this one in quite a long time. It read quickly, but I felt that it had substance. It didn’t feel, as so much has recently, like junk food. Perhaps the thing I appreciated most was a heroine I really liked and could admire. Ani is a very real character, well-developed, with actions and emotions that feel natural and uncontrived. So many of the female lead characters in books seem flat, petty, or stereotypical. If I had a daughter, I’d want her to have literary role models like Ani – smart, self-sufficient, unafraid, and caring.

The best part of all is that Shannon Hale has written several other books including three other books in the Books of Bayern series, which includes Enna Burning, River Secrets and Forest Born. Those will certainly be top of my list next time I visit the library. And clearly this means I’ll need to ask my mother-in-law for more reading suggestions.

Previous Post: « The Devil Wears Prada – Lauren Weisberger
Next Post: The Perfect Wife: The Life and Choices of Laura Bush by Ann Gerhart »