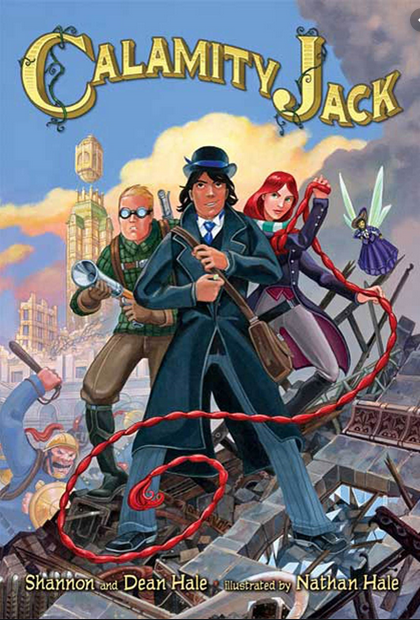 8 of 10: Calamity Jack is a graphic novel I’d recommend to anyone who’s already a fan of the genre and to those who’ve never opened a graphic novel in their life. Fun, and fast paced, although not quite as great as the first book, Rapunzel’s Revenge.

You know, of course, that I already love Shannon Hale, so I was prepared to love both of these books. She co-authored them with her husband, Dean Hale, and the illustrations were done by Nathan Hale (despite having the same last name, he is unrelated to the other two). And love these books I did.

Rapunzel’s Revenge was one of the very first graphic novels I ever read and I instantly fell in love with it. It was funny and clever and had beautiful full-color illustrations. I bought copies of it for both of my libraries and pre-ordered copies of Calamity Jack.

Rapunzel’s Revenge was about Rapunzel’s escape from the tower (thanks to her long braids, she rescued herself), her teaming up with Jack, and her subsequent saving of her hometown and mother from the clutches of the evil witch lady who ruled it.

Calamity Jack goes back and gives some background about Jack before he met up with Rapunzel (hint: it involves a bean stalk and a goose that lays gold eggs) and then Jack and Rapunzel’s journey to the big city, Shyport (Jack’s hometown), where he hopes to impress her with his street smarts. Except everything is going to ruin in his city, thanks to a nefarious plot that Jack unwittingly helped start with the aforementioned bean stalk fiasco.

I read a bit about the book’s background on Shannon Hale’s site and she talked about how much more difficult it was to write than Rapunzel’s Revenge, and how it was a much more complicated kind of book (crime caper rather than western). I think you’ll get a feel of that just by comparing the two covers: 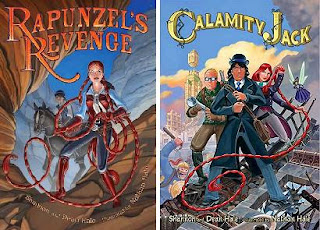 Rapunzel’s Revenge is one I think many of the kids at my elementary school will enjoy, while Calamity Jack will take a much stronger reader to catch everything that’s going on and stick with the story. I’ll be interested to see how the two go over in my libraries (the copies just arrived last week and haven’t gone out yet).

I love that these Shannon Hale books are so clean – it can be surprisingly difficult to find graphic novels that fit this bill. Calamity Jack has a bit of romance in it, but it’s played more for laughs, I thought, than anything else.

My one complaint about the Calamity Jack is that if you haven’t read Rapunzel’s Revenge (or if, like me, it’s been a few years since you read it and it’s a bit of a blur in your mind now), it’s kind of hard to sort out some of the early parts of Calamity Jack. It took me forever to figure out how it lined up with the first book, chronology wise. But maybe I’m just not all that bright (I’m willing to admit it’s a distinct possibility).

Anyway, it’s a fun book, and I definitely enjoyed reading it, but I wish I’d reread Rapunzel’s Revenge before starting in on Calamity Jack.

********************************************
I  received a free advance copy of this book as part of a book tour. You can read more about this book on the other participants’ blogs here: Sally Apokedak, Reading is my Superpower, firesidemusings.blogspot.com, Through the Looking Glass Book Review , Booking Mama, Cafe of Dreams, Becky’s Book Reviews, The Hungry Readers, The Friendly Book Book, My Own Little Corner of the World, Book Blather, GreenBeanTeenQueen, Book Crumbs , Abby (the) Librarian, Dolce Bellezza, Homeschoolbuzz.com, The Book Cellar, Carrie’s YA Bookshelf, Bookshelf Monstrosity, Frenetic Reader, KidzBookBuzz.com, Maw Books