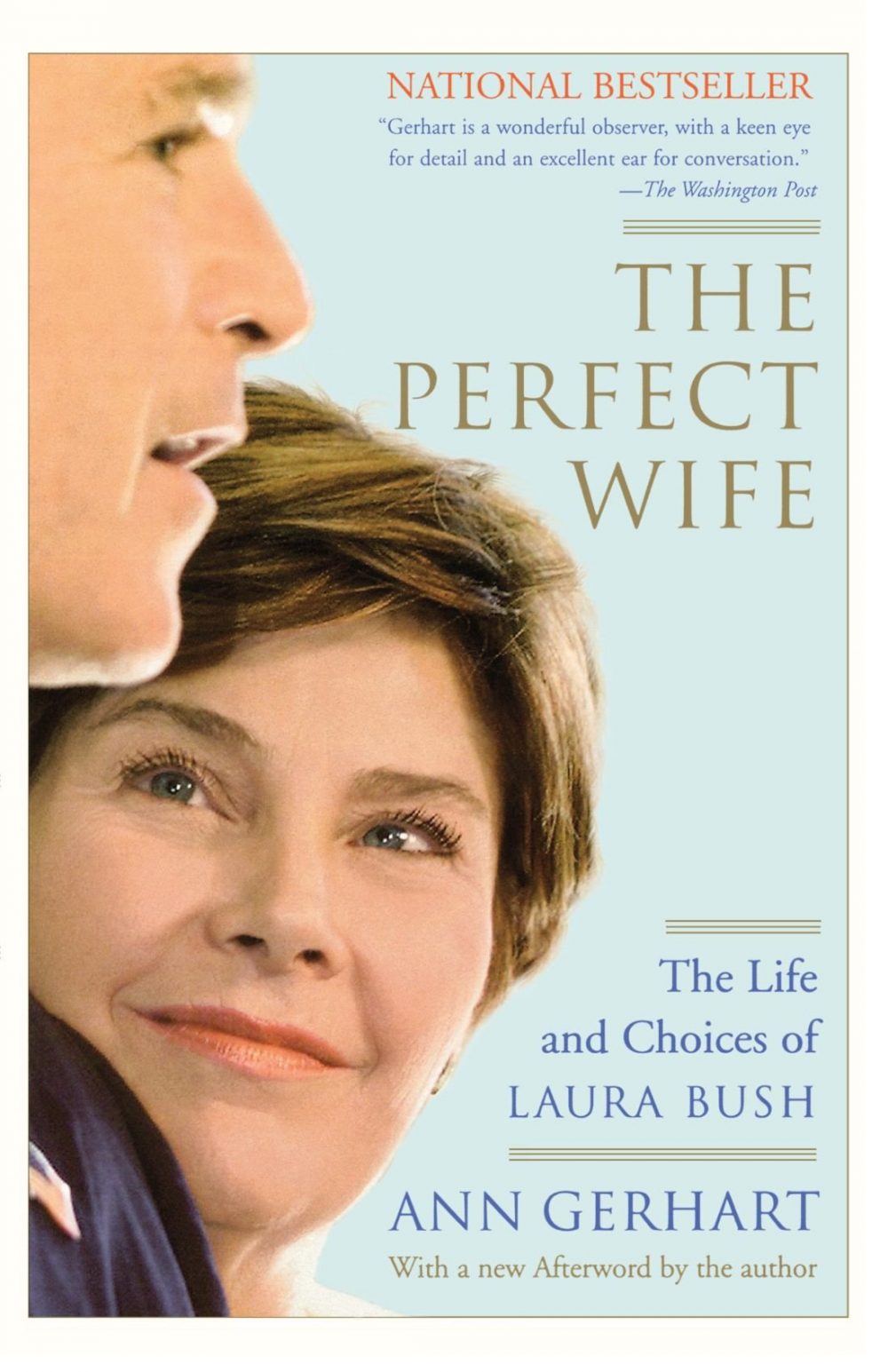 the perfect wife: the life and choices of laura bush by ann gerhart

I have always been fascinated by the American presidents and their families. When I saw The Perfect Wife: The Life and Choices of Laura Bush on the biography shelf in the library, I was intrigued. Despite George W. constant appearances in the news, Laura is almost completely absent in the media. In fact, I can’t think of ever having seen her on the front of a newspaper/magazine except the tabloids with headlines like “Bushs’ Private Divorce!!! Laura in Tears!!” As it turns out, Laura very much desires her life to be this way, craving privacy and avoiding the limelight.

The Perfect Wife begins, of course, with Laura’s childhood in Midland, Texas, where she grew up in the apparently idyllic setting of the 1950’s with friendly neighbors, stay-at-home mothers, children riding bicycles, and communities that were as close as extended family. She was a model student, moderately popular, and an obedient daughter. She decided to be a teacher in the second grade and followed that path, teaching for several years in poor schools before getting her masters and becoming a librarian. Then, in her thirties, she met George W., was engaged six weeks later, and, after another six weeks, was Laura Bush. She quit her job, moved back to Midland, and stayed at home as a wife and, later, a mother.

The author carefully details Laura’s great strengths. She is an avid reader with a startlingly good memory for what she reads, she keeps close tabs on current events and politics (although she refuses to discuss politics), and she pursues her own interests like gardening and bird-watching. She is a great patron of the arts, attending numerous concerts, art exhibits, and theatrical performances. I am impressed by her unwillingness to let her own life and interests be swallowed up even with a husband with such a powerful personality. Still, she says that her main priority is her husband’s happiness, and she will gladly set aside her own priorities to make sure that his ambitions are fulfilled. She is completely capable of and absolutely willing to fit her life around his desires. She accommodates him, yes, but she does not lose herself in the process.

There is a distressing chapter about the Bush twins, Jenna and Barbara (named after their two grandmothers). Laura has felt very strongly that her children should have a “normal” life and has gone to great efforts to protect them from the press, refusing even to release a family picture. The girls, Gerhart describes, are self-involved, irresponsible, and completely selfish. They ridicule their parents, are embarrassed by their parents public roles, disregard the law, and refuse to be at all involved in political life. Laura’s parenting mantra seems to have been “they didn’t choose this life” and therefore cuts them a great deal of slack in their behavior, even requesting their Secret Service details to back off when they attempted to stay with their charges or prevent them from underage drinking. Unfortunately, their mother’s unconditional love seems to be at least partially in vain – her daughters are distant and reluctant (sometimes completely unwilling) to visit at the White House or Camp David. Gerhart describes Laura’s melancholy when she says that “I have tried to get them to come here for spring break . . . but they don’t want to come here. I hope they realize how much their mother misses them.”

The Perfect Wife also details her response to September eleventh, when she took on the role of comforter to the nation, lifting and encouraging those around the country. Her most public period, Laura gained the respect of millions by her actions and gently calm demeanor after the attacks. Laura also makes it very obvious that she does not want anyone to think she is behind policy in any way. She is clear on her role as a wife, not an advisor, but she also works very hard to protect her husband’s image, restraining him when she feels he is becoming too outspoken or too rambunctious.

Gerhart clearly, albeit gently, disapproves of Laura’s reticence to speak up publicly about issues, particularly those that she is so well-informed about, like education. There is, of course, the balance that must be maintained as First Lady – contradicting her husband or showing him up would not be-well-received either by the public or her husband. Still, it seems obvious that Gerhart believes she ought to show more gumption about the causes she truly believes in and use her platform as a way to push these agendas forward.

There is certainly much to be admired about Laura; one can only aspire to being as well-read and proficient at retaining information as she clearly is. She is a supportive wife, a loving daughter and daughter-in-law, dedicated to taking care of herself and her own needs, and steadfast in her commitment to education and literacy. However, as the author points out numerous times in The Perfect Wife, Laura really is a mystery. Deeply private, she does not want an “image,” but rather to do the things that interest her and matter to her, while protecting and supporting her husband and family. I can’t help but admire her for numerous reasons and this book seems to do just what it seems to have set out to do: portray Laura as she really is, a woman of great strengths and human flaws, all protected by a carefully-guarded cloak of privacy.