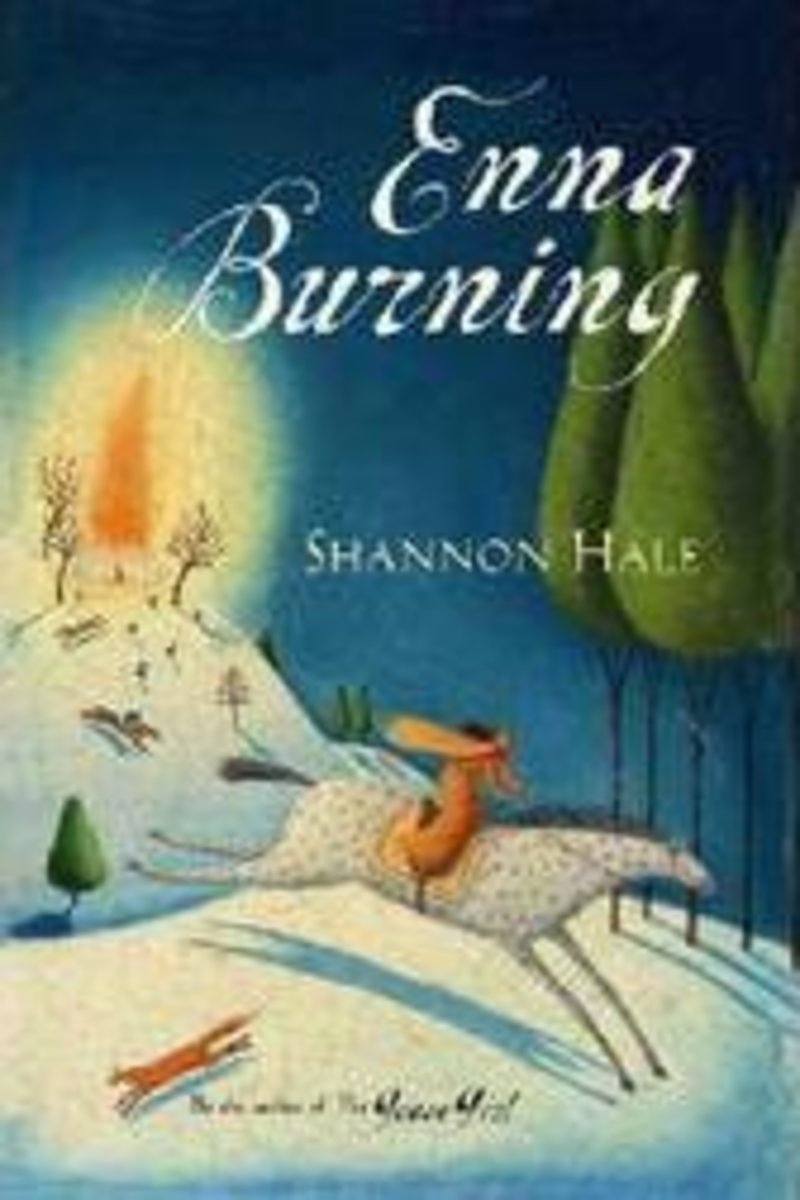 Last night we went camping. On our way up to the campground, I read while Bart drove (this is a very rare scenario, because Bart gets bored when we’re driving together and I’m buried in a book), because I was nearly done with Enna Burning and I was desperate to finish it. When we arrived, I was still about ten pages from the end, but we got out and visited with the other families there from our ward. Bart and I set up the tent, unloaded the car, and got situated. And then I got back in the car and finished the book. Because it was that good.

I thoroughly enjoyed “The Goose Girl,” and this is the sequel to that book. It follows Enna, who is Ani’s (the heroine of “The Goose Girl”) closest friend. Enna’s brother, Leifer, discovers a scroll of ancient vellum that instructs him how to control and create fire. Enna is deeply disturbed by his discovery, especially as it seems to take control of him. As Bayern goes to war against it’s neighbor, Tira, Leifer eagerly volunteers to fight, and aids Bayern in winning the first battle when he sets Tiran soldiers on fire. Tragically, the fire kills Leifer as well (from the inside out, Enna notes when she takes his body to the funeral pyre).

Enna, desperate to be of help to her country and also suspecting that this fire power could make her into someone of note, rather than just a forest girl, takes the vellum and reads it, learning how to make fire as well. She is worried about telling anyone and makes three rules for herself in order to avoid Leifer’s horrific fate: 1) she will tell no one, 2) she will never burn a person and 3) she will never let the fire grow as large and out of control as Leifer did.

Early in the war, after the first battle, a war augury takes place, with one volunteer Bayern soldier fighting a captured Tiran soldier. The outcome of this fight foretells the outcome of the war. Enna’s dear friend Finn volunteers to fight the much older and more experienced Tiran. Finn is a good fighter, but he is just not a match for the Tiran, and Enna, determined not to let Finn die, sends the fire into the Tiran’s sword just as he is poised to run Finn through. The sword doesn’t burst into flames, of course, but the heat makes him drop the sword and and Finn wins the fight, without anyone noticing the wisps of smoke emanating from the sword. Enna feels the message is clear: The Bayerns will win the war, but only if she intervenes.

She begins by riding alone at nights to the Tiran scout camps and burning their tents. Unfortunately, the urge to burn becomes stronger and stronger, and it takes more and more of her willpower to keep from burning constantly and at anyone or anything around her. Eventually, she breaks her first rule, and then the second. She is terrified of what she’s becoming, but cannot see any way of stopping it. How can she help her country without destroying herself and those she loves?

I was surprised that I liked Enna Burning quite a bit more than “The Goose Girl,” but, on further consideration, it makes sense that Shannon Hale would improve as an author from her first book to her second. The Enna Burning book is much faster paced than “The Goose Girl” and has many more twists and turns in the story. Still, even with a more complex and faster story, it has all the rich atmosphere and deep, realistic characters that made me love “The Goose Girl” so much.

Enna Burning is just phenomenal in every way. I can’t wait to read the next book in this Books of Bayern series, called “River Secrets.” Bless good authors for writing more than one book.

If you liked this review of ENNA BURNING BY SHANNON HALE, you might also like these books: