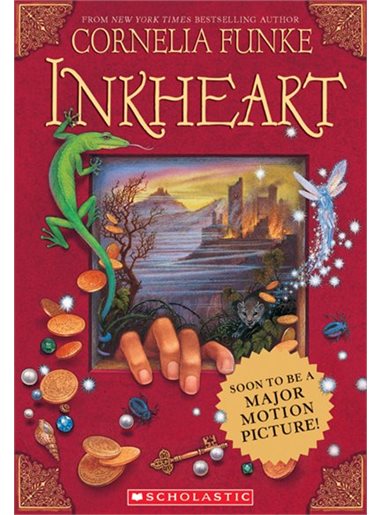 My younger brother mentioned Inkheart to me a while ago and when we were getting ready for our flight home to Austin in September, I brought it home with me. When we came home from D.C., I checked out The Thirteenth Tale, but nothing else, so when I finished it up, it was clear that a non-library book would need to be found for I have a lunch break that needs to be read through every day. Fortunately, this book was sitting on the vanity, just waiting to be picked up.

For some reason, I expected this book to be about dragons (hint: it’s not), but I realized later it’s because one of her other books is called Dragon Rider. I have not read that book, but I feel certain that it is about dragons. Even without dragons, though, this book is quite good (just kidding – I am not actually a huge dragon fan, so it probably made me like the book more for not being a dragon book).

Meggie (did it take me a good 25 pages to realize her name was not “Maggie”? Yes, it did. There are drawbacks to being a fast reader) lives with her father, Mo, who is a book binder by trade and particularly skilled at bringing ancient and tattered books back to their former glory. They are both bibliophiles (Mo says that they don’t need furniture as long as they have books and most of the rooms and hallways of their home are lined with stacks of books); Meggie’s mother is gone, although little mention of where or why or how is made.
Looking out her window one night, Meggie sees a strange man staring up at her window, seemingly untroubled by the torrential rain. She tells her father, who lets the man in. Eavesdropping on their conversation, Meggie hears Dustfinger tell her Mo (who he called “Silvertongue”) that Capricorn is after him and he must take the book to him. Meggie (and you, gentle reader) does not know what this means, but she is understandably alarmed when, the next morning, Mo wakes her early, tells her to pack her books, and that they are leaving to visit her Aunt Elinor and do some work at her house. Dustfinger, after realizing that no amount of talk will convince Mo/Silvertongue to go to Capricorn, asks to go with them.
Two days later, after asking Elinor to hide the book, Mo is kidnapped by strange men and Dustfinger disappears (Meggie is sure he’s been kidnapped too; Elinor thinks he’s the reason Mo was kidnapped).
Dustfinger reappears, though, and promises to take them to Capricorn. When they arrive, however, they realize they’ve been duped and that Dustfinger’s plan was to give them up to Capricorn in return for something he desperately wants.
Locked in a cell, Mo explains to Meggie the things he has hidden from her and sheds light on the terrifying and utterly strange circumstances they find themselves in. Long ago, when Meggie was only three, Mo read aloud to Meggie’s mother from “Inkheart.” Suddenly, three strange men appear in the living room – characters from the book. They draw weapons and Mo chases them off with a sword. Only when they are gone does he realize that his wife is missing. Mo had known for years that he could, on occasion, draw items and characters from the books he read aloud and whenever something had appeared (like the dead cat from Tom Sawyer), something of his had gone missing (for the cat, he lost a plush animal). He tries, to no avail, to read his wife back out of the book, but she appears to be gone forever.
Capricorn wants two things from Mo/Silvertongue. He wants the copy of Inkheart that Mo still has, for he wants to burn all copies so that he can stay in this fabulous new world he has arrived in. He also wants Mo to stay nearby and read piles of treasure out of various books for him. Dustfinger, on the other hand, misses his old world terribly and wants Mo to read him back in. He brings Elinor and Meggie to Capricorn under the impression that Capricorn will force Mo to read Dustfinger back into the book.
And Mo and Meggie just want to escape with their lives and hopefully a copy of Inkspell so that they can continue trying to rescue Meggie’s mother.
It took me a LONG time to get into this book – probably a good 200 pages or so. It wasn’t that it wasn’t a fun book, but I just wasn’t gripped by the storyline or the characters. Fortunately, the second half of the book really sucked me in and I thoroughly enjoyed it.

I really loved all the references to other books (from classics like Peter Pan to Roald Dahl’s The Witches). Why am I such a sucker for books that refer to other books?

Once the Texas Book Festival is over, I plan to go on and read the sequel, because it really was a fun story.

If you liked Inkheart, you might enjoy these books too: