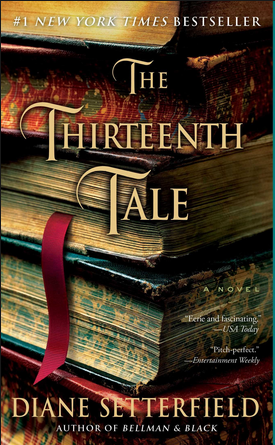 This is one of those books that I feel like I just stumbled upon. The Thirteenth Tale by Diane Setterfield, of course, is a serious best-seller, so it’s not as though I’ve found some secret treasure here, but I hadn’t talked to a soul who’d read it, and frankly I didn’t know one thing about it, except that I’d seen the title pop up on amazon recommendations several times. Two weeks ago, when I was getting ready to go to the library, I looked up the title on a whim and discovered that not only did the library own it, but it was checked in. So I checked it out and read it.

Margaret Lea works in her father’s small bookshop. She loves to read, but is mainly interested in 18th century writers. Her father, more well-rounded in his reading, suggests she might enjoy the writings of Vera Winter. Margaret certainly knows who Vera Winter is – the most famous author of her time – but is disinclined to read her work, simply because all her reading time is already devoted to 18th century writers.

Not only is Vera Winter known for her exceptional writing, but also for her mysterious background. Margaret says its as if she appeared, in her twenties, with the publishing of her first book. No one has any idea who she really is or where she is from. Whenever she is asked about her past, she makes up some fantastic story, often correlating it to her most recent publication. It has become almost a rite of passage to have such an interview with Vera Winter.

One day, Margaret returns to the bookstore late at night to find a letter addressed to her from Vera Winter. The letter says that Vera is nearing the end of her life and is, at last, ready to disclose her true background and she wants Margaret to be the one to write it. Margaret has written a few short biographies, but mostly for her own pleasure, and is quite shocked that she is the chosen one.

She meets with Vera Winter on the appointed day and is almost ready to leave, sure that she will get just another fanciful set of tales from the author, when Vera tells her, desperately, that the story is about twins.

Margaret is intrigued. . . she herself is a twin, although no one knows this except herself and her parents (who have never told her of it). One day, as a child, home alone, she found the birth certificates hidden in a tin under her parents’ bed, informing her that her twin died on the day of their birth when the doctors attempted to separate the conjoined twins. She feels, constantly, the hole left in her life by her sister’s absence. The hint at another story of twins convinces Margaret to stay and she takes on the project.

The story Vera tells is both fascinating and a bit horrifying. The two twin girls are born under somewhat suspect circumstances and brought back to their grandfather’s house – Angelfield – by their recently widowed mother. The mother is clearly quite insane and she is eventually taken off to an asylum. The girls continue to live there with their uncle, who shuts himself in his room, weeping for his lost and beloved sister, a kindly housekeeper, and a gardener. The house, far too large to be cared for by this measly staff, goes downhill quickly, and the girls become quite wild, speaking in their own language, eating when they please, and generally acting little better than animals.

Mysterious things happen at Angelfield, many of which can’t be explained. Vera says she refuses to tell the story out of chronological order and will tolerate no questions, so Margaret (and the reader) must wait for it to unfold. Who is the little boy in the garden? What woman in white smashed a violin into the head of the doctor’s wife? Who is the ghost that the governess (come to restore order and civility to the house) sees? How did the house burn down? How does Vera rise from this fairly horrific background to become such a celebrated writer? And, most importantly, can Vera finish her story and answer these questions before she dies?

I’m still not sure if I would recommend The Thirteenth Tale or not. I found myself flying through it and anxious to get back to reading when I had to stop for such things as work and sleep, but I’m not sure how others would like it. It had a bit of that gothic feel to it (very similar to Rebecca, although not as wonderful). Some parts seemed to go very quickly, while other areas of the narrative dragged a tad. I can’t explain what it was that drew me to this book, and perhaps that is what makes me hesitant to push it on you.

The Thirteenth Tale by Diane Setterfield is quite a well-written book, though, and the story is certainly compelling enough, so if you feel inclined to read it, by all means go ahead.

If you liked this review of the thirteenth tale by diane setterfield, you might also like these books: