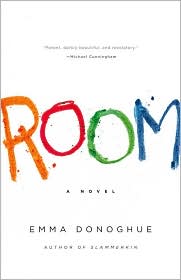 9 of 10: When I wasn’t reading this book, I was thinking about it. Room by Emma Donoghue, told from the perspective of a five-year-old boy living in captivity with his mother, blew me away.

You may have heard about this book – it’s been wildly popular with all the big review sources, has been a major bestseller, and was on the New York Times list of the 10 Best Books of 2010.

I never would have picked it up if Julie hadn’t so convincingly sold me on it.

The premise sounds so awful – it’s about a woman who has been kept in a shed-turned-prison for the last seven years after being abducted. She has a five year old son (the child of her abductor, of course) and the whole book is told through the little boy, Jack’s, eyes.

Jack has never once been outside of Room, the eleven square foot shed he and his mother live in. He doesn’t even realize there is a world outside of it – the things he sees on TV, he believes are made up. His mother hasn’t directly lied to him, but she also doesn’t want him to realize all of the world and life he is missing out on.

And she’s done an amazingly good job of making his life as normal as possible under the circumstances. She reads to him, they play games, they have a routine. And his mother protects him, fiercely, from the realities of their situation.

Then, about a third of the way through the book, they manage to escape (as I saw this coming, I thought that this would really strain my credibility, but it was actually not too bad) and now the world, which has always been so compact and predictable, stretches out into a huge and unknown space.

His mom has done her best, of course, but there are things you wouldn’t even consider that he doesn’t know – how to climb stairs or how to judge new distances (he keeps running into things). He can’t comprehend that there are multiple copies of the same book in the world. The loss of the rigid routines frightens Jack and he finds himself missing Room and his small existence with just his mother. Because of his mother’s protection, Room was virtually entirely positive for him. He knows none of the horrors his mother has.

Having it told through Jack’s eyes works unbelievably well. As an adult reader you catch things that he notices but doesn’t understand. When his mother tells him a little about her life before her abduction, her family, her time as a student, he finds this utterly unbelievable, but as a reader it is heartbreaking to hear her story. After they escape, you catch glimpses of the media storm that erupts, but Jack is mainly just amazed to see himself on the television.

Despite her amazing efforts, Jack’s mother not a perfect parent. And he’s not a perfect boy either. They are, both, such real, vivid characters. Their imperfections make it a little easier to imagine yourself in their place.

It’s not depressing, although there is a lot of sadness. Some parts made me laugh outloud, like when she’s being interviewed by some Oprah-like person who says, “Now many viewers have been shocked to hear you are still breastfeeding your son,” to which the mother responds, “In this whole situation, that’s the shocking part?”

It’s been a few weeks since I finished it and I still find myself thinking about it at the oddest moments, remember little details of it (like when the mother has her first shower in seven years or when she tries to explain to Jack that they don’t have to make special requests for SundayTreat now, but can buy whatever things for themselves, when they want to).

Room is not a book that’s easy to explain. It’s as experiential a book as I have ever read – it’s almost like watching a movie, rather than reading a book.

In some ways, it’s like The Hunger Games. The premise just about makes you ill, but somehow it works in a way that isn’t graphic or over-the-top. Room by Emma Donoghue is heart-wrenching and yet so life-affirming, I wanted to weep (I may have, just a little).