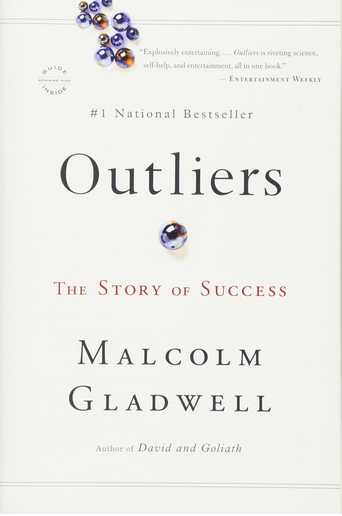 9 of 10: Outliers was gripping, from first page to last. This is just the kind of non-fiction I can’t read fast enough; it’s as easy to read as a novel.

My parents gave us this book on CD for Christmas. I hadn’t really planned on listening to it, at least not right away, but when I found myself with nothing else to listen to on my drive home from school, I popped it in and was instantly hooked.

Outliers the Story of Success is one I couldn’t stop talking about, telling Bart every last detail about it, and sending my mom emails telling her about the cool things I’d learned from it. I even had an extremely vivid dream where I saw a friend from high school and spent twenty minutes going over the first chapter in great detail (accurately, I might add). So, yes, it would be safe to say I loved Outliers.

outliers the story of success by malcolm gladwell

The basic premise of the book is that people who do remarkable things do so because of unusual circumstances and opportunities that are not available to everyone else. For instance, the first chapter is about how the majority of professional hockey players in Canada are born in the first three months of the year. The cutoff is January 1st, so you have boys eligible for the same teams that have an age span of twelve months. At the age of 9 or 10 (which is when boys are chosen for traveling teams), a difference of 12 months can be huge. You’re most likely going to be bigger and more coordinated. Not because you are a hockey prodigy, but just because, if you were born in January, you have almost a full year on the kids born in November and December and they just aren’t as physically mature as you are.

So you’re picked to be on the traveling team. You play 70 games in a season instead of 20. Your coach is better, as are your teammates. You practice more hours in the day. Is it any surprise, then, that you end up a better hockey player than the kid who didn’t get picked for that team?

Outliers the Story of Success is full of these kinds of things and I found them all fascinating.

On the other hand, Gladwell isn’t discounting sheer intelligence and hard work, which I appreciated. When he talks about Bill Gates, who had opportunities virtually no other child had, he also is sure to discuss that those opportunities would have meant nothing if Gates hadn’t been ready to work hard and take advantage of those opportunities.

Is the book perfect? Of course not. I thought the chapter about how a heritage of rice farming in China is the cause of Asians’ success in the math/science field fell short of actually proving causation. And, of course, because it’s his book, Gladwell can pick and choose what examples to use that prove his theory. But overall, it’s a fascinating read, even if you have a few instances where you kind of want to say, “hmm, I’m not actually buying that.”

Six or eight months ago, I wrote a post about a non-fiction book and someone asked if I’d been paid to review it (I assume because it was so different from the teen books I gravitate toward), but really informative non-fiction is definitely in my top three genres. I love books about education or nutrition or behind-the-scenes or explanations for unexplained trends or occurrences (like Freakonomics). So, of course, I’m an excellent audience for this book. But really, I think this book would appeal to most people.

I started reading The Tipping Point a few days ago and, while I’m enjoying it, so far I’ve found Outliers far more interesting. So, if you’ve read something else by Gladwell and come up a bit short, you may still enjoy this one.

If you liked this review of outliers the story of success, you might also like these books: