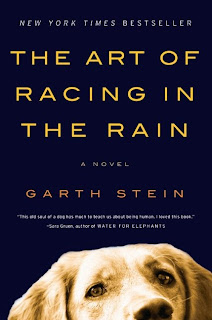 6 of 10: The Art of Racing in the Rain was a faster read than I was expecting, but not one I’d necessarily recommend. A little too much swearing for me, and also the main character was a dog. And I, um, don’t really love animals.

This was the September book for Tell Me What to Read. I requested it right away, but it took me a while to open it. When Bart and I went down to DC for the National Book Festival, I read the entire thing on the two plane flights. It was, obviously, quick read.I’m not sure what I was expecting from this book, but my initial expectations weren’t very accurate.

the art of racing in the rain by garth stein

The Art of Racing in the Rain book is all told from the dog’s point of view. His name is Enzo and he lives with his owner, a young guy named Denny. Denny is a race car driver trying to make a name for himself, while working at a car repair place to pay the bills. Enzo is crazy about racing, too, watching it alone at home on the television while Denny is gone at work.

Enzo’s life changes a lot, though, when Denny gets married and he and his new wife have a baby. Life, as it usually does, isn’t what they expected and some things are much more difficult than anticipated. Denny’s wife, Eve, gets ill, a fact that Enzo discovers far earlier than the humans find out. And that’s just the beginning – it’s a bit like Gone With the Wind, where you think “WHAT MORE CAN POSSIBLY HAPPEN?” And, I’m not saying this book is the next Gone With the Wind.

Enzo also believes that he’ll be reincarnated as a human after his dog life is over and he looks forward to being able to read, to speak, and to having thumbs (the thumbs is the biggest thing for him). He feels like he understands humans pretty well and is constantly frustrated by his inability to communicate very well with them.

I don’t know – The Art of Racing in the Rain book was more interesting than I thought it’d be, considering it was about a DOG (I’m sorry, all you mega-animal lovers; I just don’t get it), but it also never gripped me. I didn’t particularly like any of the characters and the book had a bit of a grungy, depressing feel that made me slightly uncomfortable.

Has anyone else read this? What did you think?

If you liked this review of the art of racing in the rain, you might also like these books: