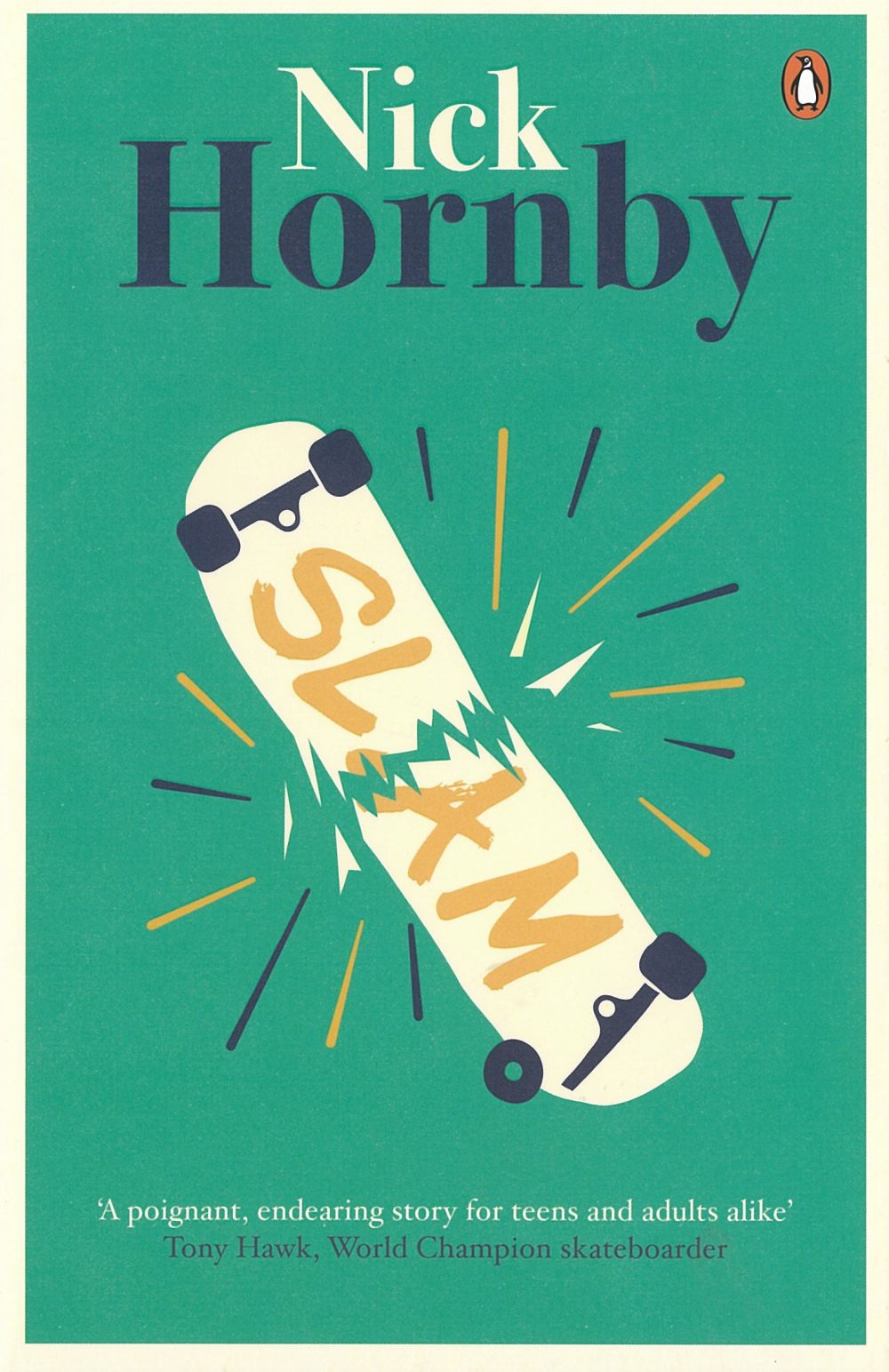 I’ve never read anything by Nick Hornby and didn’t even recognize his name when I picked up Slam at the library (for those of you equally uninformed, he wrote About a Boy which later was made into a movie starring Hugh Grant).

Slam by Nick Hornby was a quick read and very engaging. It had a some really funny funny bits (like when Sam goes on a date with a girl who wants to get pregnant really young because “I don’t want to be like fifty when he’s sixteen? You can’t go out with them then, can you? To clubs and that?” and Sam thinks, “Oh yeah, I wanted to say. That’s what it’s like. Clubbing, clubbing, clubbing. If you can’t go clubbing with your mum, then what use is she?”). But really? This book is also dang depressing. And from what I hear about his other books, that’s mostly Hornby’s style.

Sam’s mom got pregnant with him when she was 16 and is always lecturing him about how it sort of ruined her life (not in a mean way, amazingly; he and his mom are quite close). His parents split up about ten years ago and it’s obvious from the beginning that his dad isn’t much of a dad.

Sam’s mom convinces Sam to go to a party with her for a friend she works with (this woman has a daughter about Sam’s age and Sam’s mom thinks he might be interested in meeting her). The daughter, Alicia, turns out to be gorgeous and Sam is instantly taken with her. For about twenty seconds. She starts being a bit rude to him and he tells her so (he also says she thinks she can get away with it because she’s beautiful). For whatever reason, she takes this to heart and starts being much nicer to him. They hang out a bit that night, go on a date the next night and are soon utterly infatuated with each other.

But then, being stupid love-sick teenagers, they have sex and Alicia gets pregnant. This is devastating to Sam because he know how sick his mom will be about it and also because he fears it will ruin his chances of going to college (he’s a fairly good student and quite a talented artist). His family has struggled to get an education and good jobs and he worries that he will now be one more in the long line of people who were almost about to make something of themselves and then screwed it up by being dumb.

Alicia’s parents are also furious and want her to have an abortion, which Alicia flatly refuses. She is keeping the baby. They see Alicia’s future as being ruined and Sam as a low-life idiot who is to blame.

Interestingly, Alicia has no plans to go to college (her professor parents don’t know this) and frankly isn’t all that bright. Sam, despite his fairly depressing background, is quite bright and motivated. And despite his reservations about being a father, he is determined to be better than his dad has been.

Sam is also really into skateboarding and Tony Hawke is his idol. He’s read his autobiography about fifty times and talks to the poster on his wall (the poster then “talks” back to him quoting lines from the autobiography) (this works better than you might think).

Anyway, Slam by Nick Hornby is a good book, but I also sort of wanted to go drink myself into a stupor after reading it just to dull the pain.

Previous Post: « The Sharper Your Knife, The Less You Cry: Love, Laughter, and Tears at the World’s Most Famous Cooking School – Kathleen Flinn
Next Post: Division of Labor »