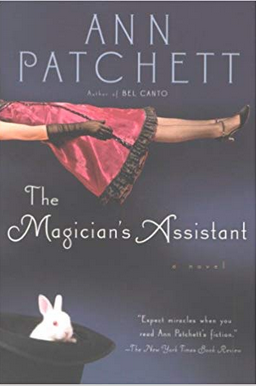 Kelly is a good friend of mine from library school. We had only limited interaction in actual school, but after she graduated, we started talking online a lot about job hunting, YA books we loved, and my inability to complete some of my TA responsibilities without significant help from her (I was the TA that replaced her when she finished up at UT).

She vigorously promoted The Magician’s Assistant from the very first month of Tell Me What to Read (if at first you don’t succeed, and all that).

All of which is to say, I desperately wanted to like The Magician’s Assistant. And that last sentence probably will let you know that I didn’t.

Kelly and I have a lot of overlap in our reading tastes, but she often enjoys quirky books more than I do (like How To Say Goodbye In Robot which she loved and which made me want to go take up binge-drinking). However, because Kelly is both mature and a librarian, she didn’t take my non-love of this book personally, because she realizes, correctly, that it has nothing to do with her, and everything to do with my personal reading tastes. Much as our friendship survived when she barely made it through Jellicoe Road alive after I praised it up and down as the best book ever that everyone should read right now, amen.

the magician’s assistANt by ann patchett

Sabine worked with Parcifal, a magician, for more than 20 years as his assistant. It was love at first sight for her – Parcifal was charming, glamorous and handsome. Tragically for Sabine, he was also gay. They were always close, though, and when he gets sick and knows he only has a few years left to live, they marry (I was never exactly sure why that was, except maybe that she’d be the legal beneficiary of his estate, etc).

After his death, Sabine receives a shock when Parcifal’s lawyer reveals that Parcifal’s name is actually Guy Feterra and contrary to what he’s told her for 20 years, his family is not dead, all members killed in a long-ago car accident, but rather alive and well in, of all the non-glamorous places, Nebraska.

Sabine, still broken-hearted over Parcifal’s death, finds herself desperate to know more about this man she believed she knew backward and forward, and so finds herself first meeting the family and then going out to Nebraska to spend weeks with his mother and his sisters and nephews. It is, of course, all very bizarre, and Sabine is quick to recognize the absurdity of the situation, but also unnerved by the secrets of Parcifal’s past, especially his relationship with his father.

Kelly asked me afterwards if, even if I didn’t enjoy The Magician’s Assistant, I didn’t think the writing was incredibly descriptive. She was right and, frankly, I think that was the problem for me. The descriptions of bright, sunny LA depressed me to no end and then snowy, forsaken Nebraska depressed me even more. It was too real, too sharp, too bleak.

It kind of dragged a little for me too – it seemed like not all that much happened and I never had any idea if it was ever going to go anywhere.

And yet, I am extremely likely to read whatever Kelly recommends to me next, just because most of the time, our taste overlaps. And when it doesn’t, we can tell each other so. A happy librarian ending if there ever was one, I’d say.