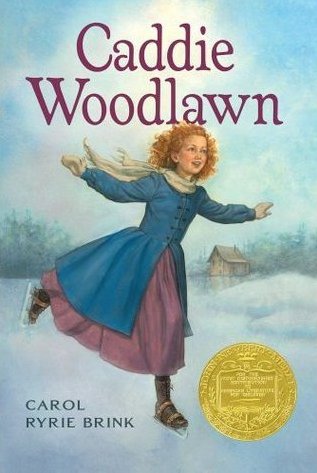 You know how some books you go back and reread and they’re not nearly as excellent as you remember?

Caddie Woodlawn is one of those childhood books that was even better reading aloud as an adult to Ella than it was when I was a child.

Reading this one together over the past month has been just utterly delightful.

If you’re not familiar with this Newbery-winning book written back in the 1930s, it’s the story of the author’s grandmother and the her escapades growing up in Wisconsin around the time of the Civil War.

Caddie’s family came from Boston, leaving behind the civilized life their mother still longs a little for, and Caddie and her younger sister were very sickly. After the younger sister dies, Caddie’s father convinces his wife to let Caddie run with the boys (she has a brother just older and one just younger) and spend most of her time outdoors, helping on the farm, and running a little wild, rather than inside with her older sister and mother helping with the food, housekeeping, and sewing.

The story opens with Caddie at eleven and she’s now perfectly healthy and hearty, and there’s nothing her brothers can do that she won’t try too. The three of them are always getting into trouble or finding some sort of adventure, whether that’s skating on too-thin ice, putting out a prairie fire at school, or crossing the river to visit the Indian settlement.

It’s basically impossible not to like Caddie – she’s so high-spirited, but also fairly thoughtful and has a soft heart. She loves being with her brothers and dreads the thought of having to become a lady at some point, but she also feels like she could be ladylike if she wanted to be.

There were multiple times (at least four), where I got so choked up that I could hardly keep reading aloud. There are just so many sweet and touching moments in the book. One, particularly, stood out to me: Caddie gets in huge trouble for playing some pranks on a visiting cousin and when she’s punished, she’s determined to run away once everyone is in bed. But her father comes in after everyone else is asleep and gently explains to her why her mother was so angry and also what both of them hope for Caddie as she grows up. It was the kind of speech you want to print out and keep on your bathroom mirror to remind you of the sort of parent you want to be.

Of course, there are loads of hilarious moments and hijinks by Caddie and her siblings, and Ella often asked for an extra chapter or two because she couldn’t wait to see what new adventures they’d go on. It’s really a perfect read-aloud.

I frequently hear Caddie Woodlawn compared to Laura Ingalls Wilder, and I can see that – they both live in the Wisconsin frontier and they both are a little bit on the tomboy side, but there are a lot of differences too.

Caddie’s family is much larger (seven children compared to the Ingalls’ four) and her family is also significantly more well-to-do. As an adult, I was highly aware of how POOR the Ingalls were (which I don’t remember noticing as a child), with Pa carefully fixing any bent nails so he didn’t have to buy more. The Woodlawns have a large farm and seem to have plenty of money, plus they’re much more stable than the frequently-moving Ingalls.

Like the Little House books, Caddie Woodlawn has gotten some criticism about the portrayal of Native Americans, although I found this one much less jarring than Little House on the Prairie (when I read that one aloud to Ella, I found myself editing a fair amount of Ma’s dialogue about the Indians). Tensions are high between the white settlers and the Native Americans and at one point, most of the settlers gather at the Woodlawn farm after rumors of a coming massacre spread. But Caddie’s father has made big efforts to become friends with the nearest tribe, and I thought the book did a pretty good job (especially considering how old it is) addressing in an age-appropriate way the reasons for the antagonism between the two parties.

I’ve been surprised by how many people haven’t heard of Caddie Woodlawn – it’s not nearly as popular as the Little House series, but I think it’s every bit as good. And there’s something about Caddie I just find so irresistible.

There’s also a sequel – Caddie Woodlawn’s Family (it was originally titled Magical Melons) – that I’ll have to order, because my library doesn’t own a copy of it. I can hardly wait for another round of adventures with Caddie and her siblings.

There’s even a Caddie Woodlawn movie made in 1989, although I’ve never seen it.

P.S. If you’re looking for other great read-alouds like Caddie Woodlawn by Carol Ryrie Brink, I highly recommend: