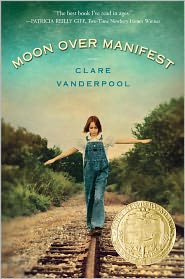 9 of 10: Moon over Manifest is sparkling historical fiction, set in a little town during the Great Depression and full of flashbacks to WWI. A great pick for the Newbery Gold.

This one was a big surprise as the winner for the 2011 Newbery medal – most of the major predictors didn’t even have it on the short list (although as a few people have pointed out, it did get three starred reviews from the major professional review sources, so it wasn’t as if it just came out of absolutely nowhere).

I requested Moon Over Manifest from the library the day the awards were announced and it wasn’t even out of processing yet (for some reason, it gives me great joy to be the first person to read a library book).

moon over manifest by clare vanderpool

Abeline, twelve years old, has spent her life with her father, Gideon, traveling the country as he works on railroads and other nomadic projects. And then, after a brief incident where she gets hurt and takes a bit to recover, he ships her off to spend the summer with an old friend of his, Shady, in the tiny town of Manifest, Kansas where he grew up.

The whole thing has left Abeline a little blindsided. She has no idea why her father suddenly doesn’t want her with him and she’s not even certain he’s coming back at the end of the summer to retrieve her (although she will hardly let herself entertain such a notion).

Shady is the interim pastor (when she asks him how long the previous pastor has been gone, he replies “fourteen years”), but he also runs a little speakeasy, since Kansas went dry in 1881, long before national Prohibition. In the room Abeline is staying in, she finds a little box of treasures, the kind of thing a child collects

One of the items is a letter between two boys, Ned (who is in France fighting in World War I) and Jinx, who apparently was still back in Manifest. There is mention of “the Rattler,” who is apparently a spy. Abeline burns with curiosity, but she’s not quite brave enough to ask Shady about the contents of a letter she knows she probably shouldn’t have been reading in the first place.

Then, while working off the debt she owes from the town’s “diviner,” Miss Sadie, after breaking something, she begins hearing stories about the town back during WWI and somehow each of these stories involves one or two of the items in the treasure box. Since she hasn’t shown or mentioned the box or its contents to Miss Sadie, Abeliene is perplexed how Miss Sadie knows these stories.

Between the letters in the box and the stories told by Miss Sadie, Abeline starts to discover that this dusty, dried-up town has a rich history and a previously strong community. But can Manifest return to those better days? And where does her father fit in with this history?

The story of Abeline’s summer trying to hunt down the Rattler dovetail nicely with Miss Sadie’s high-adventure stories of Jinx and Ned. And the two are tied together by newspaper columns written during the war by Hattie Mae Harper, which Abeline has been reading for most of her life (her father kept a large collection of them).

Moon Over Manifest would make a great read-aloud book – the dialogue is snappy and funny, there are so many great stories within the main story, and the cast of characters is varied and wonderful; I’m definitely putting it on my list of books to read my own children someday.

It also is lovely that you have both a female and a male lead, Abeline in the present, and Jinx in the past.

It reminded me a little of Hattie Big Sky, so if you’re a fan of that one (and if you’re not, what’s wrong with you?), you’ll probably enjoy this one. This is what historical fiction should be like.


Copy checked out from my local library. Before anyone else.