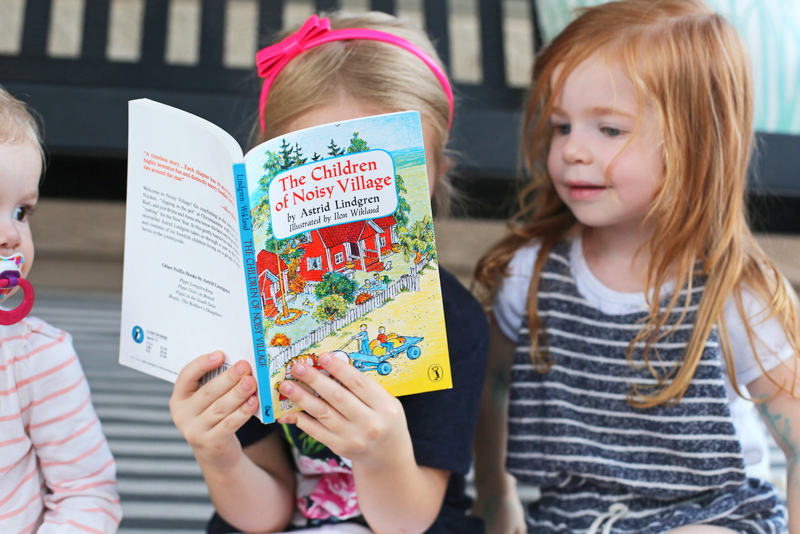 My mom sent Ella The Children of Noisy Village for her birthday last month, and it was new to me.

Not only had I never read it, I’m not sure I’d ever even heard of it.

I immediately recognized Astrid Lindgren’s name, since she’s the author of Pippi Longstocking, but this series was new to me.

I’ll admit that I was a little worried because we tried Pippi Longstocking last year, and after about two chapters, Ella politely asked if we could read something else instead.

But The Children of Noisy Village was 100% delightful and we flew through it in a few weeks.

the children of the noisy village by astrid lindgren

The Children of Noisy Village is narrated by Lisa, one of the six children who lives in Noisy Village, which is a set of three farms all built close together

Lisa has two brothers, another farm has one boy, and the third farm has two sisters. And the book is basically a year in their life in Noisy Village, from school to crayfish catching to Christmas to running errands in the big village for their mothers.

I love that the children are mainly well-behaved and get along, but they also are real children that come up with some pretty ridiculous ideas and sometimes get on each others’ nerves. There isn’t too much teasing or unkindness, but mainly good-spirited fun and lots of imaginative games.

About half way through, Ella said, “This book is mostly just little stories, while Time at the Top is one long story.” And she was just right – every chapter basically stands on its own, and gives you a little glimpse into every day life in these Swedish families.

And it’s just so sweet! It has that simple old-fashioned feel that I really love, and it’s full of hilariously little-kid adventures.

Each chapter is pretty short, so we could read just one before bedtime or cruise through two or three during school.

Ella loved every page, and Ani enjoyed coming over to look at the pictures or listening while she colored or played with Legos. Star just wanted to point out every time a dog or kitty appeared in an illustration which, fortunately for her, was about every third page.

If you have a child between about four and eight, I think The Children of Noisy Village is a perfect pick. I can’t believe I’ve never read it, but you can bet I immediately went and requested Happy Times in Noisy Village, because I’m not ready to leave behind these stories.

And apparently there is a Christmas book (it’s a picture book, rather than a novel), which is making me so anxious for the holidays I can hardly stand it.

If you liked this review of the children of the noisy village, you might also like these books:

Previous Post: « An Easy Book Tracking Pennant Banner
Next Post: 3 Trivial Products That Are Making My Life Better This Year »