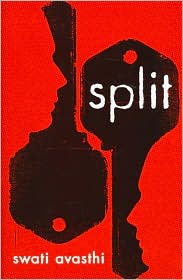 9 of 10: Split is one intense book – you wouldn’t expect anything less from a book that honestly and fearlessly tackles the subject of domestic violence. I couldn’t stop thinking about this book and the real, flawed characters.

I heard about this book from my all-YA-knowing friend, Kelly, who highly recommended it after it was chosen as a finalist for the Cybils. And then when it showed up while I was browsing Overdrive (the system many libraries use that lets you download audiobooks straight to your computer or mp3 player), I figured I needed something to listen to while I made batch after batch of ice cream (and, of course, the occasional dinner).

And this book did not disappoint. I was looking for chores to do so I could keep listening.

The book Split by Swati Avasthi begins with Jace showing up on his brother’s doorstep in New Mexico, but the story begins years earlier with Jace’s family. His dad has been abusive for years, hitting his mother and then, when Jace is still quite young, Christian, the older brother, starts stepping up, trying to protect his mother.

But then, of course, Christian grows up and escapes, going first to college and then disappearing entirely. The family doesn’t speak about him – it’s as if he’s died. Life goes on as normal except now Jace is the one taking the brunt of his father’s anger to protect his mother.

It’s been five years since Jace has heard from him. Then, at age 16, Jace finally has had enough and when he stands up to his dad, he gets thrown out of the house. As he’s leaving, his mom hands him an envelope with an address. Christian’s address in faraway New Mexico (Jace’s family lives in Chicago).

Jace’s mom promises that she’ll leave her husband and come to live with the boys by Thanksgiving (about three months away) and this keeps Jace going.

He slowly adjusts to his new life – a new school, a new job, even a new girl, but he’s also hardpressed to cut ties with Chicago entirely since his mom is still there, Lauren – his previous on-again-off-again girlfriend is there, and there’s always the very real fear that his dad will track them down (he knows his dad has, in the past, made major efforts to locate Christian).

And you quickly realize that it’s not just worry about his mom that is keeping Jace awake at nights – he also has a secret he’s afraid to share with anyone, but that he can’t move past either.

Avasthi has done a great job of writing a book that is high-tension without turning to gimmicks or cliffhangers to achieve that. The stress of the situation weighs on you, even when Jace is playing soccer or doing homework. And the memories Jace has from his past are horrible and violent, but not done for shock value or described in overt detail.

I particularly liked how real Christian was. How easy might it have been to make Christian into the big older protector brother? He is that, to some extent, but he’s also just as damaged by his growing up experience as Jace is and his reactions take Jace a while to figure out.

But every character is rich and real – the parents, Christian’s girlfriend, Lauren, Dakota (the girl in New Mexico that Jace finds himself interested in).  And, of course, Jace himself. Oh, how I loved Jace, wanted him to forgive himself for leaving behind his mom, wanted him to be able to move beyond his defining past and make a new start for himself.

I’ve never been in any kind of abusive relationship, so I can’t say with any authority that this is extremely realistic, but it seems to me that it must be. The constant terror, the ups and downs of the abuser, the worry about how you’ll handle your own relationships, the difficulty of extricating yourself and your loved ones from those relationships. . . it all rang so true to me.

It reminded me strongly of The Rules of Survival, another book I listened to (even the narrators seemed similar), and which broke my heart, while hitting all of my reader buttons. I’d be hard pressed to pick a favorite between the two.

The topic alone suggests that this is not a book for everyone (there’s also some swearing, although I did not find it gratuitous). The book Split is painful and sad, as it should be. But it’s also hopeful, without being unrealistic or trite.