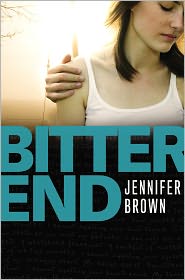 I read Hate List, almost by accident, a couple of years ago and was absolutely astounded by it. It’s a seriously well-done book. I couldn’t wait for a second book by her.

And when I heard this one was going to be about abusive relationships, I was intrigued because I was so drawn in by Split, which was also about abuse (although Split is about an abusive father, rather than an abusive boyfriend). Five months later, I still find myself thinking about Split on a regular basis.

But Bitter End fell flat for me.

Alex is the middle daughter in her family of three girls. Her mom left, going to Colorado (for reasons Alex doesn’t know), when Alex was fairly young, and died in a car crash. Since then her father has been extremely withdrawn, leaving the girls to mainly fend for themselves,  especially emotionally. He refuses to talk about their mother.

Alex does have two terrific best friends, but it’s not until Cole transfers to their school and she begins tutoring him so he can keep his grades up enough to play basketball, that she really feels like she’s met her soulmate. His looks, his smarts, and mainly how much he seems to admire her, draw her in immediately and all is good for a month or two until he starts getting abusive.

Of course, I knew from the beginning that Cole was going to turn abusive. And so it was hard for me to ever see too much of the “sweet” boyfriend that Alex was so desperate to hold onto. He was just always horrendous in my eyes (which surprised me because in Hate List, I felt like it so masterfully portrayed Nick as both the school shooter and a real, likeable person).

And the whole set-up seemed a little contrived – the dead mother, the absentee father, the road trip with friends that she starts to blow off – it all seemed to be there only to set up the perfect scenario for the abuse story line, rather than fleshing out Alex and her life and world. And I recognize that people who get trapped in abusive relationships often do have other things going on in their lives that make them perhaps more susceptible to an abusive relationship. But I don’t want those things to feel like they were planted in the story only for the purpose of building up to the abusive boyfriend.

Mainly, though, my problem with Bitter End was how paint-by-numbers it felt. It seemed almost like someone had looked up the main indicators and progression of an abusive relationship and then built the story around that. Fabulous relationship? Check. Initial abusive incident? Check. Hiding it and convincing yourself it’s a one-time occurrence? Check. Isolating yourself from family and friends? Check. And so on.

Sad? Yes, of course. Gripping? Not for me.

It just felt like an issue book. When I read The Things a Brother Knows

earlier this year, I told Kelly how much I’d enjoyed it and how impressed I was that it wasn’t preachy one way or another about the way. She agreed, saying, “It was a story about Boaz.” And Bitter End by Jennifer Brown was just the opposite. It didn’t feel like a story about Alex. It felt like a story about abusive relationships.

Perhaps I’m too hard on Bitter End or have over thought the whole thing (surprise! this would be the first time ever that I have overthought something). And, hey, I read it in two days. In fact, one night, I was having a hard time going to sleep, so I went and read it for over an hour. So it’s not like I was slogging through it. It wasn’t terrible. I just had such high hopes for it that were not met.

If you are looking for something on this topic (because who isn’t looking for a book on abuse), I would recommend Dreamland by Sarah Dessen. It was far superior to this.

If you liked this review of bitter end by jennifer Brown, you might also like these books: