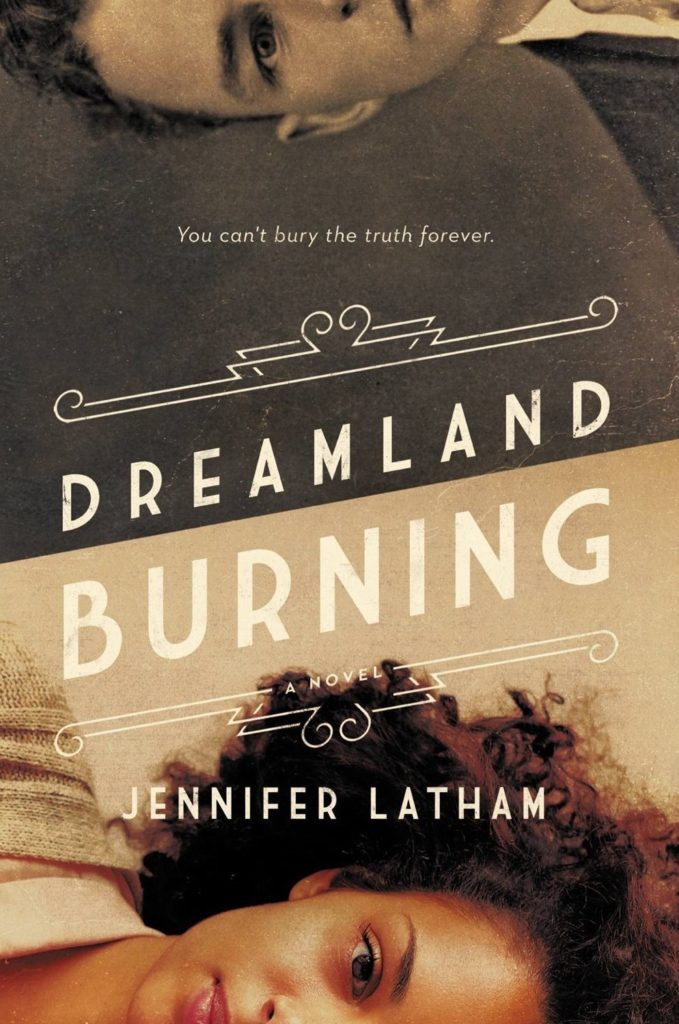 I first saw Dreamland Burning on Modern Mrs. Darcy’s Summer Reading Guide and the minute I read the description, I knew I wanted to read it.

It checked all sorts of boxes that interest me in a book: it’s a young adult novel, it has a mystery, there are two narrators, and it deals with race relations in America.

One of my all-time favorite books is The Best Bad Luck I Ever Had and this one seemed like it might be at least somewhat similar.

I loved it from the first page.

The story starts out with Rowan Chase. She’s seventeen-years-old in present-day Tulsa, Oklahoma and her summer takes a sharp detour from her plans on the first morning of vacation when the workers doing some renovation on her family’s property discover a skeleton. The skeleton appears to be about 100 years old and the police don’t seem to care that much about figuring out who it belonged to or why they ended up below the floorboards of an old historic home, but Rowan can’t let it go and starts digging into the mystery.

The other narrator is Will Tillman, who is also 17, but he’s living in 1921 Tulsa. The city is deeply segregated and Will has little interaction with any black people except for the woman who works as housekeeper and cook in his family’s home. After getting into some trouble, Will’s father makes him start working at the family victrola store. Will’s father outwardly toes the Jim Crow line, but he’s not opposed to serving black customers, despite the fact that it could get him into trouble if anyone found out. Money is money, as far as he’s concerned.  And eventually, one of these back-door transactions introduces Will to a black teenager about his same age and his little sister.

You know from the beginning of the book that the 1921 storyline is building to the two-day massacre that took place in Tulsa which is both one of the worst incidents of racial violence in American history (hundreds of African-Americans were killed) and something that almost no one in modern times knows about.

There’s a lot more going on in this story, including the financial conflicts between Will’s parents (his mother has a lot of tribal oil money), Rowan’s job in an inner-city medical clinic, and the terrifying man who owns a shop near Will’s dad’s shop and seems to have his eye on Will.

And, of course, the slowly-unraveling mystery of who this skeleton belonged to and how it got under Rowan’s floorboards in the first place.

The back and forth between the two story lines is really well-done – it never feels choppy or forced, and I was equally invested in both stories and characters.

And I was on pins and needles the whole time trying to figure out who the skeleton belonged to, as the clues that Rowan and her friend James seem to point one direction and then another.

I also loved that the characters aren’t static – some characters start out reasonably good and then find themselves on the wrong side of right, while others go the opposite way. None of the characters seem to have all the answers and although the mystery is solved in the end, the book doesn’t try to wrap up all of history in a tidy little bow.

Dreamland Burning is definitely a pretty mature YA book – there’s some language (including racial slurs that are historically accurate but definitely jarring) and some pretty violent scenes, but it never felt over-the-top to me.

I’ve seen a few people mention in various reviews they felt like the author had an agenda and, I suppose I can see what they’re saying, but I didn’t feel like it was a MESSAGE-Y book at all. To me, it felt more like reading a book about the Holocaust, and when I read a  Holocaust book, I never feel like the author has “an agenda” to frame Hitler and his vision for the Nazi Party as evil.

Racial issues have been (and obviously still continue to be) some of the most difficult problems in America, and I thought this book did a really good job handling the many facets of racism both in the past and in the present.

When I mentioned it on Instagram a few weeks ago, many people commented on how it was one of their favorite books they’d read this year, and I’m right there with them.

If historical fiction appeals to you, this is a really good one.