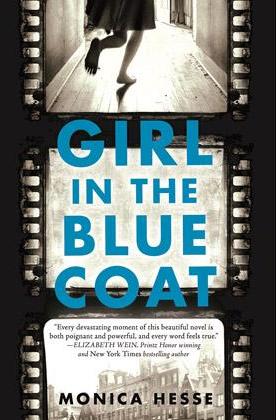 You know how some books you pick up at the library and then renew forty times and finally read them three days before they’re due back?

And then there are books like Girl in the Blue Coat which I picked up from the hold shelf, started reading while Star played with blocks in the children’s department of the library, and then read every spare second over the next two days.

Isn’t it such a great feeling when you’re sucked immediately into a story and you can just savor every moment of being in an engrossing book?

Girl in the Blue Coat is a WWII book (I’m also currently listening to Everyone Brave is Forgiven and have Lilac Girls next in the queue, so it seems to be a WWII-themed December for me), and it’s an excellent one.

girl in the blue coat by monica hesse

Hanneke is 18 and lives in Amsterdam. The Nazis took over the country several years earlier (it’s currently 1943), and instead of the university education she imagined for herself at this age, she works for an undertaker and also dabbles in the black market through her employer.

She’s surprisingly good at it, and likes to think it’s her small way of getting back at the Nazis, who she hates not only in general for overrunning her beloved city, but specifically for killing her boyfriend, Bas, on the Dutch front lines when they invaded in 1940.

But her neatly ordered (if somewhat dangerous) life gets turned upside down again when, during a regular delivery, one of her customers nervously asks her to help find a Jewish girl that she’s been hiding in her home and that has somehow disappeared. Obviously, the woman can’t go to the police but she’s desperate to know what happened to this girl and get her back to safety if possible.

Hanneke is not thrilled by the request, but she can’t help but be at least a little intrigued by how and why this girl would have left a secure location and where she might have been.

Of course, the minute she accepts the assignment, she finds herself getting much deeper into the Amsterdam Underground resistance than she ever intended to, and finding that, possibly, passing along a few illicit cigarettes for a big chunk of money is not quite as brave as she’d once thought.

She’s amazed to find out how brave and bold so many ordinary people are, and she wonders whether she’s willing to make the leap to be one of them.

This book was SO well done, I thought, with a million plot twists and turns that I never saw coming (but that didn’t feel over-the-top or too far-fetched either). It was the perfect mix of mystery and history, with an imperfect heroine you could really root for.

If you’re looking for something completely absorbing to read during vacation, I highly recommend this one!

If you liked this review of girl in the blue coat, you might also like these books: