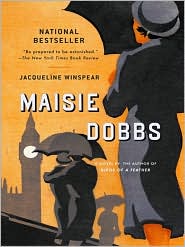 This story of a female private investigator, Maisie Dobbs, putting her life back together after her experiences in France as a nurse during WWI was a fun and quick read, with a main character I really came to love.

How have I completely missed this series? They been enormous best sellers and the eighth book just came out last month. The author was one of the keynote speakers at TLA this year. And yet. . . I’d never heard of them until Alison suggested it for Tell Me What to Read.

There are two story lines going on in Maisie Dobbs – one is set in the present (which, in the context of this book is actually not the present, but in 1929 England), and one in the past, beginning with Maisie as a 14 year old and working its way up to her time as a nurse during WWI.

In the present, Maisie has just begun her own business as a private investigator. One of her first clients is a man who believes his wife might be having an affair, but as Maisie follows the wife, she realizes that the wife is dealing with the death of a solider, something that Maisie can relate to all too well, after having seen so many people killed on the battlefield during her stint as a field nurse. But it quickly becomes evident to Maisie that something about this soldier’s death is not quite right and she is determined to get to the bottom of it.

In the past, Maisie’s mother has recently died and after years of paying for treatment and doctors, Maisie’s father is forced to find a place for Maisie to work in order to cover the bills. Soon after going to work as a maid for a rich family, however, Maisie’s new employers discover how bright she is and set her up with a private tutor, who helps her get accepted to Cambridge. All of this education is a little bit tricky when she is from the working class and higher education is, at this time, fairly uncommon for people who aren’t of the elite class. But after only a year at Cambridge, she signs up as a nurse in order to help the war effort (WWI has just recently begun). Before leaving to France, she meets and falls in love with a doctor who is also going over to assist in the war efforts.

I won’t lie, the “mystery” part of it isn’t actually alllllll that much of a mystery. I mean, she didn’t even start trying to solve it until the eighth disc (of eight discs) and then it was over and done in about a chapter and a half. The substance of the book is in the characters and watching everything play out.

Maisie herself is so delightful – smart, kind, and sensitive. She’s clearly had a difficult life, but she’s also optimistic about the future, and eager to help other people out. Any series really depends on the main character and Maisie is easily capable of supporting this long series.

And the sense of place in Maisie Dobbs is strong – it’s so perfectly British and most definitely a Great War book.

Part of what delighted me the Maisie Dobbs audiobook was listening to it being read by a great British narrator. I mean, really, what book isn’t improved by a British accent? (Answer: no such book exists).