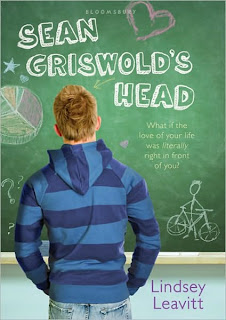 Sean Griswold’s Head reminded me of some of Janette Rallison’s books (part light-hearted, part serious, a sweet romance, and some parts that made me laugh outloud). Definitely one of the more fun YA books I’ve read in a while.

So angry, in fact, that she can’t bring herself to even speak to her parents.

In an attempt to help her deal, her parents set up sessions for her with the school’s counselor who suggests that she pick a Focus Object, something she can think and write about in-depth until she’s ready to deal with her dad’s illness.

The counselor suggests an inanimate object, like a pencil sharpener, but Payton decides instead to write about the enormous white-blond head that she’s stared at for years (thanks to alphabetical seating since the fourth grade): Sean Griswold. As she starts to write about his head, though, she realizes she knows almost nothing about Sean. She’s lent him a million pencils and he’s passed back papers and tests for years, but other than that they have really hardly spoken.

As she starts writing about him, though, she (surprise!) starts to develop some romantic interest in him. This crush is helped along with the encouragement of Payton’s best friend, Jac, who is always interested in boys. Of course, Payton, who is new to the world of liking boys, isn’t as ready to fling her heart in Sean’s path as Jac wants her to be (not that that is going to stop Jac).

And for a while, things seem to be moving along, albeit slowly, with Sean. Plus, it gives her something to think about besides her Dad.

But of course, she can’t ignore her dad’s illness forever, not when so much of her family life has been disrupted because of it, and not when she still can’t bring herself to hardly even talk to him. Not when she can’t help seeing him struggling to button his own shirts and trying desperately to be close to her again.


This kind of storyline by Lindsey Leavitt walks a tight rope, I think. The balance between the romance and the family troubles has to be right on, and in order to make you care about both issues, you have to really like the main character (make that a main character who doesn’t want to deal, and ignores her dad because of an illness he certainly didn’t ask for, and you’re asking even more). If the romance is too much the focus, the illness makes it seem like it was thrown in to make a fluffy romance have more weight (haven’t I read plenty of those), but if the illness is the majority of the story, then the romance feels like a ploy. Like I said, tight rope.

But what do you know? Lindsey Leavitt pulls it off! It works! I enjoyed every page of it – some parts made me want to sob, others made me laugh outloud. I just wholeheartedly loved Sean Griswold’s Head. In fact, I already have the first book in her other series, Princess for Hire, on my bedside table.


If you liked this review of sean griswold’s head by lindsey leavitt, you might also like these books: