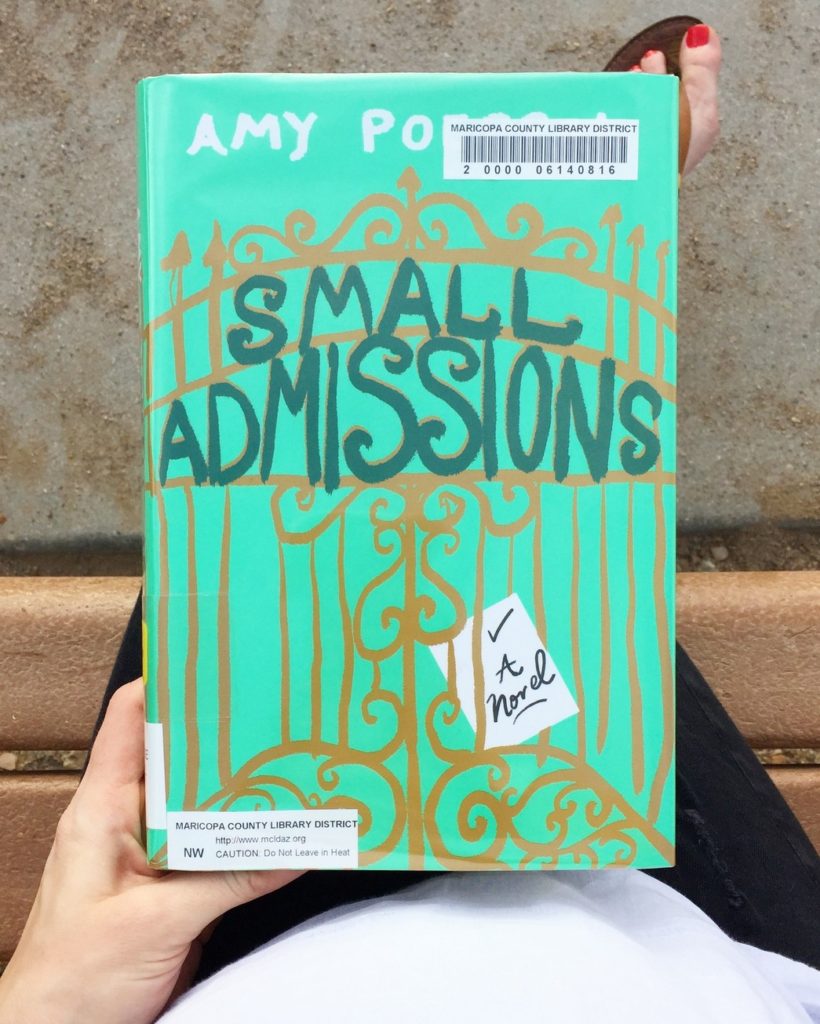 I heard about Small Admissions from Grace of Camp Patton, and since she tends to be a reliable source of recommendations for light novels, I put it on hold at the library and, a week later, it was all mine.

Bart and I have been pretty consistent this year about reading at night before bed, and this was one of those that I wanted to keep reading just a few more minutes, even though I knew I’d regret it in the morning.

It’s not the best book ever, or anything, but it’s fun and fast-paced and I wasn’t sure what was going to happen, plus it’s delightful to watch the backstory unfold.

If you’re headed somewhere for spring break this year, this would definitely be a perfect pick to pack in your beach bag.

The story follows Kate Pearson who has spent the last year wallowing on the couch after her boyfriend/almost-fiancé breaks up with her.

Kate has always been super academic and ambitious (she was a grad student in a competitive scientific field), so everyone is fairly shocked by her sudden change.

As the novel opens, things are just finally starting to look up, when Kate’s sister manages to snag Kate a job interview in the admissions department of a ritzy private school in New York City.

The interview is a complete disaster, but unbelievably, Kate gets the job and starts to actually pull her life back together. She might not have a clue what she’s doing interviewing parents and writing recommendations about the students she meets, but at least she’s not weeping into her carpet all day, every day.

Small Admissions doesn’t read quite like a standard novel – it jumps between Kate’s perspective and that of her sister’s, her boss, her two closest friends who are both keeping secrets of their own, and all the letters, essays, and emails involved in the consideration of some of the students and parents who are dying to get into Hudson Day School.

And as the story progresses, it’s fun to figure out more of what happened between Kate and her boyfriend, and how other characters are involved in how things unfold. Plus, you get a lot of background into many characters, which I always enjoy, rather than seeing everything from just a single point of view.

Grace mentioned she loved imagining it as a movie, and she’s right – it would be SO fun.