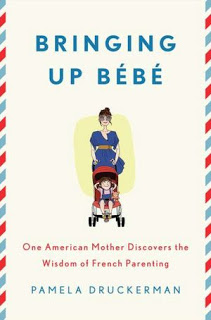 Bringing Up Bebe by Pamela Druckerman is a French parenting book about the differences in parenting in France versus the United States as observed by an American mother living abroad.

I am apparently on a non-fiction kick right now.

I recently read this article about French parenting titled “Why French Parents are Superior” (suspiciously similar to the article “Why Chinese Mothers are Superior” which preceded Battle Hymn of the Tiger Mother) and when I saw at the end that it was an excerpt from a new book, it was only a few clicks to see if the library already had it.

Happily, Bringing Up Bebe was already on order and it arrived a few days later. And I blazed through it in a couple of days, and then proceeded to talk the ears off every person I saw for the next few weeks.

Really, you don’t want to know me in real life when I’m reading a book I love. At the very least, you should hope to live far away and be inaccessible by phone or email.

Pamela Druckerman is an American who moves to Paris with her British husband. All three of their children are born in Paris and attend French day cares and preschools (at the time of the writing of the book, their oldest daughter appears to be in about first grade). As she still visits the States periodically and has many American friends who are also navigating parenthood, it becomes quickly apparent to Pamela Druckerman that French parenting does NOT look like American parenting.

Here are some thing that are different, just off the top of my head:

I’ve been particularly taken by the differences in eating in France, and how children really eat most items. Part of it is that they aren’t snacking from the moment they awake until the moment they go to bed, but also French parents see it as part of their responsibility to introduce their children to a wide variety of tastes and to learn to appreciate them. The idea of letting your child eat nothing but white pasta and french fries is absurd in France.

The emphasis on having your own life outside of parenthood is also fascinating to me. French parents don’t seem to have the same guilt that so many American parents do and they have no qualms about putting their children to bed, firmly explaining that the evening is for adults, and then expecting their child to remain in bed. They go on vacations without their children and when they have play groups, the children play together and the parents talk calmly and separately, not breaking up arguments or sitting on the floor with Legos.

And the fierce competition and need for “advanced” children that exists in American parenting really isn’t part of the equation in France. They’re not in a rush for their children to skip to the next level or have the teachers gloat over how brilliant a child is.

Really, I could go on and on about the many interesting differences that she points out. There are some things that she doesn’t agree with entirely, but overall, she does feel like not only are French parents less stressed and more able to enjoy parenthood, but that the children are happier too (in addition to being much better behaved and able to identify the differences between goat, blue, and Gruyere cheeses by age three).

I’ve incorporated several things into my own parenting, including cutting out all snacks except for one in the middle of the afternoon (and, like a miracle, my child suddenly eats everything at meal times, sitting quietly and calmly while we eat our own food. Also, I am actually hungry for meals, instead of telling Bart when he comes home for lunch that I just ate breakfast thirty minutes earlier). I also have really encouraged Ella to play more on her own (which I thought would be wildly unsuccessful and has actually. . . .not been wildly unsuccessful). And I’m making more time for the things I want in my own life, like running and reading and cooking.

There are parts of this French parenting book that drag, but a “dragging” part was usually one or two pages at the most and then it’d be 50 pages of completely fascinating stuff again.

And of course, I’m not buying into EVERY thing she talks about French parents doing in Bringing Up Bebe. I’m not planning to stop nursing my next child at three months and I don’t think I’ll be sending Ella on an 8 day school trip in first grade.

Also, although she doesn’t talk specifically about this, I noticed that her descriptions of French parenting don’t seem to lend themselves nearly as well to things like individuality or that the French society cares nearly so much about creativity as we care in America.

If you liked Bringing Up Bebe, these are some other parenting books you might enjoy: