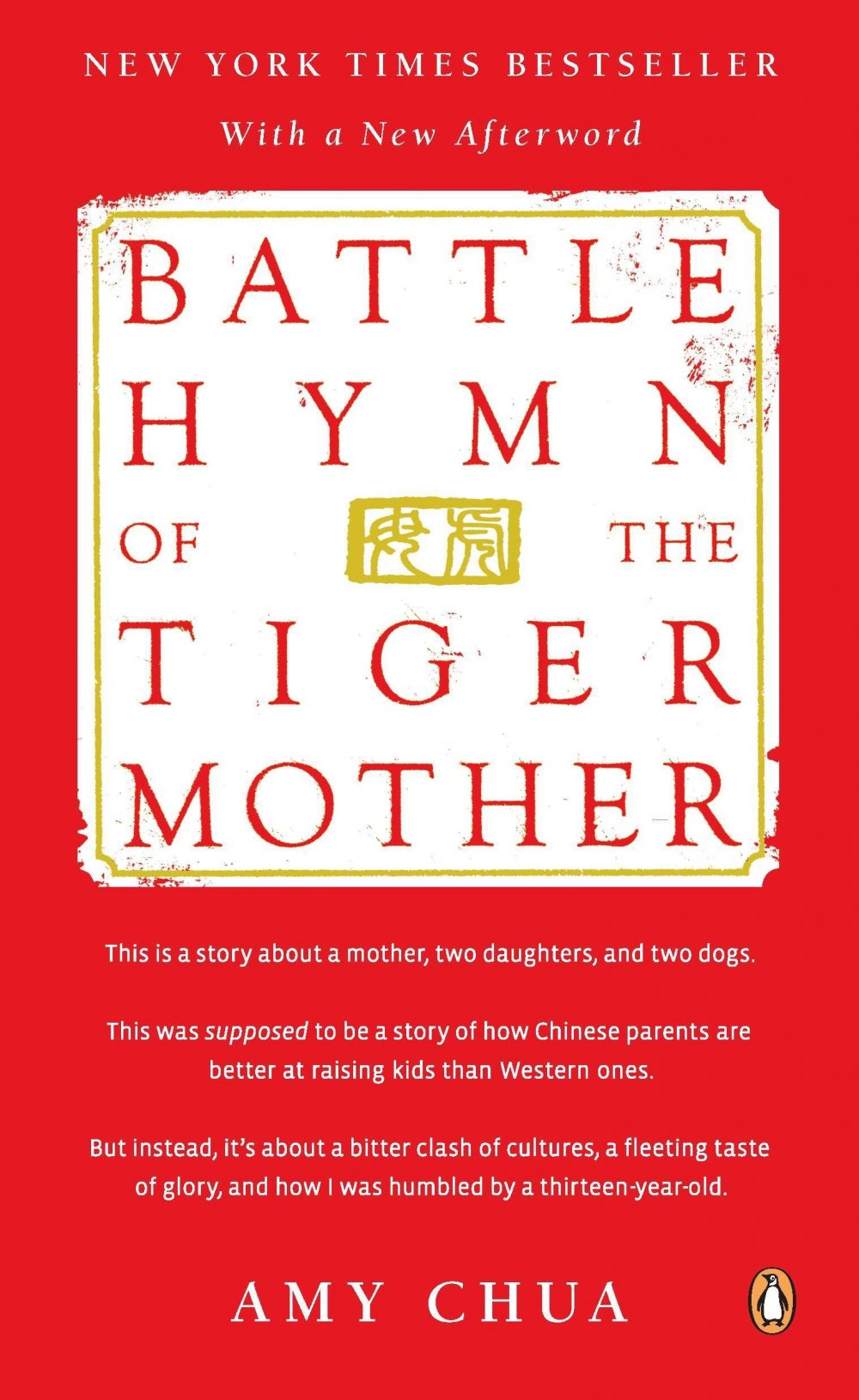 First off, I LOVED Battle Hymn of the Tiger Mother.

I know Battle Hymn of the Tiger Mother is deeply polarizing. When the book first came out, the Internet exploded with opinions on it (mostly, as far as I could tell, incredibly negative, much of them in response to this Wall Street Journal article titled (not by Amy Chua) “Why Chinese Mothers Are Superior.”

I could tell how strongly people felt about this book just by reading the brief reviews my own friends left on Goodreads.  And then, out of curiosity, I looked at the star ratings for it on Amazon and saw that the breakdown looked like this:

Anyway, I loved it. I would definitely be one of the four or five star reviews – the entire book is fascinating and I would highly recommend it.

battle hymn of the tiger mother by amy chua

Amy Chua is the daughter of Chinese immigrants, who worked themselves to the bone to succeed in America and they pushed their children to do so as well. Chua went to Harvard and currently works as a law professor at Yale. Her husband also teaches law there and, as far as I could tell from the book, is pretty brilliant.

It’s no surprise that they want their two daughters to succeed. And for Chua, that means music. The older daughter, Sophia, plays the piano. Lulu, the second daughter, is a violinist.  They will be raised the Chinese way – where the parent has ultimate authority and the children submit to that authority. There won’t be this Western parenting nonsense about letting your child give up something that is hard the minute they ask. There won’t be the option of getting anything less than an A in every subject in school. They don’t go to playdates or do extra-curricular activities at school. They never have sleepovers and the violin goes on every vacation (and Chua makes calls before each trip arranging a spot to have Sophia practice piano).

Both daughters are very musically gifted and the hours their mother spends practicing with them really helps them achieve at a high level (at one point in the book, Sophia performs at Carnegie Hall).

But while Sophia is a pretty ideal child, Lulu digs in her heels. She and Chua are enough alike that the conflict between them is intense from the time Lulu is very young and, as she becomes a teenager, it becomes even worse.

It sounds kind of horrible, but I found Chua really likeable. She’s trying to raise her children the way she’s seen generations of successful people be raised (herself and her siblings included) and around her she sees Western parents whose kids get into drugs, flunk out of school, and eventually want nothing to do with their parents. Of course, raising your child in the Chinese fashion is a whole different ballgame when all your child’s friends are being raised by Western parents.

And you can tell that her behavior toward her children (including a memorable time when her daughters knocked out birthday cards for her in about ten seconds and she tore them up saying she didn’t want them if that’s all the effort they were going to put into them) is motivated by love. She really wants them to succeed and do the best they can.

Of course, if you read the subtitle on the cover (it says, “This was supposed to be a story of how Chinese parents are better at raising kids than Western ones. But instead, it’s about a bitter clash of cultures, a fleeting taste of glory, and how I was humbled by a thirteen-year-old.”), you can guess that things aren’t going to work out so neatly.

And indeed, Chua begins to see (as her own firmly-Tiger mother tells her) that this method is going to backfire in a big way with Lulu. Does she back down? Let Lulu give up the violin? Or does she power through and risk her daughter hating her forever? (And isn’t that, in and of itself, SUCH a Western parent question to be asking?).

At one point, after an enormous blowout on vacation where her daughter smashes a glass at a restaurant, Chua says,

It occurred to me that this must be how Western parents think and why they so often let their kids give up difficult musical instruments. Why torture yourself and your child? What’s the point? If your child doesn’t like something – hates it – what good is it forcing her to do it?”

So yes, she does start to see the side of Western parents after a while. But she stills balks at some of their views (in as much as she perceives them):

All these Western parents with the same party line about what’s good for children and what’s not – I’m not sure they’re making choices at all. They just do what everyone else does. They’re not questioning anything either, which is what Westerners are supposed to be so good at doing. They just keep repeating things like ‘You have to give your children the freedom to pursue their passion’ when it’s obvious that the ‘passion’ is just going to turn out to be Facebook for ten hours which is a total waste of time and eating all that disgusting junk food.

The version I read had a sort of epilogue to it, about the media firestorm that accompanied the release of the book and how much she worried that her family was going to be destroyed by the attention she got over this book (and by the death threats she received, the critics calling her the worst mother in the world, etc).  She talked about how people didn’t understand that the book is, to a large extent, satire and a way of poking fun at herself. I loved this little epilogue and it made me love Amy Chua and this book even more.

I am very much NOT a Tiger Mother. I want my children to succeed, but I’m not willing to spend my entire life babysitting them in order to make that happen. I don’t want to stand over my child and micromanage their music practice for hours on end, day after day. And really, I tend to think that most people, no matter how brilliantly they start out, end up to be quite average adults. I don’t care if my child doesn’t get into Harvard.

And yet, I could see clearly some of the benefits that her children reaped from her parenting method, extreme though it might have been. They learned how to work hard and how to not give up with something was difficult.

I find myself wondering, actually, about the people who reacted so so strongly to Battle Hymn of the Tiger Mother. Do they just think she is completely abusive? Or does her parenting style and defense of it rattle their beliefs in their own parenting method? I don’t know, but I find the idea of sending someone a death threat over their parenting memoir a little much. Maybe that’s just me.

And really, the book is so much more than just “Chinese mothers are better than Western ones.” It’s about what the role of a mother is, and how you define success, and how different people view you, and how writing reflects reality (and how it distorts it, too). It’s just fascinating on so many levels.

I’ve picked Battle Hymn of the Tiger Mother for my book club next year and I am . . .well, I’m really excited.

If you liked this review of battle hymn of tiger mother, you might also like these books: