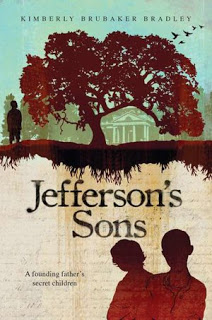 I have been waiting to read Jefferson’s Sons for ages and I finally got my hands on a copy of it (I have no idea why the wait list for a Kindle copy of it at the library was so incredibly long).

And then I read it in one day.

One of the clever things about Jefferson’s Sons is that it covers a long period of time (more than twenty years), but because the narrator switches several times, the main voice is always a child. This works wonderfully for a middle-grade novel.

The first narrator is Beverly, Sally Hemming’s oldest living child. The book begins when he finds out from his mother that Master Jefferson is his father. He’s shocked to hear this, and has a hard time following his mother’s instructions to tell no one. As he grows older, he struggles with his mother’s claims that when he turns 21, he’ll be free and he ought to go live as if he is white (he’s only 1/7 black). He hates the idea of leaving his family behind and everything that he’s known. Also, he just about worships Thomas Jefferson and treasures any interaction they have (which is very limited).

The second narrator is Beverly’s younger brother, Maddy. Maddy doesn’t feel the same love for Master Jefferson and his contempt for his father only increases as he grows older. Also, he’s not nearly as light-skinned as his siblings, and it seems unlikely that he’ll be able to pass for white when he’s an adult, which devastates him.

The final narrator is Peter, the little boy of another slave family living at Monticello. He’s watched Beverly and Maddy grow up, and now he’s starting to see his parents’ worry about what might happen to their family after Master Jefferson dies.

Of course, in many ways, Thomas Jefferson is the central character in this book, even though he rarely appears. How do you reconcile the man who wrote “all men are created equal” and then owns hundreds of slaves, including some that are his own children? I felt like the author did a magnificent job of laying out the facts of Thomas Jefferson’s life without offering heavy-handed judgement of his actions, but by the end of the book, I felt intensely that Jefferson really did some horrific things, perhaps without allowing himself to acknowledge them as such.

At one point, Maddy, having learned to read, reads to Peter some of Declaration of Independence which is framed on the wall of Monticello. Peter says, “If Master Jefferson wrote that, how come he doesn’t believe it?” Maddy replies, “He does believe it. At least, he thinks he does.”

And then, when Jefferson dies and his tremendous debts necessitate that all his property, including slaves be sold, this paragarph deeply struck me:

So this is what it comes to. Never a visitor turned away. The finest food in the country on the table every night, the finest imported wine – the grandchildren decked out in silk dresses, the favors done for friends. One hundred thirty people to be sold.  .  . The champion of freedom, Maddy thought, who owned slaves. Who lived his life so that at his death one hundred thirty people must be sold.

It’s hard to feel very admiringly toward someone who, in the last several decades of his life, chooses to live in a way that he must have known would require the unwilling sacrifice of all his slaves.

And over the course of Jefferson’s Sons, it’s fascinating and horrifying to see how much negotiation and conflict takes place to keep everything running somewhat smoothly, while Jefferson remains virtually untouched by any of it. Slaves who are caught after running away are beaten at Jefferson’s orders, but he doesn’t have to do it himself or even watch it happen. His daughter, Martha, loathes having Sally’s children around because they look so much like her father, but he plays with his grandchildren and basically ignores his slave children. Sally, for her own protection and that of her children, keeps her relationship with Jefferson quiet, even though everyone knows who the father of her children is.

Jefferson’s Sons deals with so many interesting themes – the stark segregation between white and black society that means that Beverly and Harriet, should they decide to pass for white, will never be able to trust a white person with their secret, the basic longing of a child for the attention and affirmation of a parent, the kinds of topics that everyone knows about but no one will discuss aloud, or how parentage often determines how a child is treated (Jefferson’s sons, although they are never acknowledged as such, are never given the worst jobs around the plantation). At what cost do you protect your own child? How does Sally deal with the conflict between her relationship with Jefferson and the fact that he owns both her and all their children?

This novel would make for great classroom or book club conversation.

Jefferson’s Sons is really high-quality historical fiction. Someday, this is one I’ll be quick to include when my children study early US history. I’d highly recommend this to anyone.