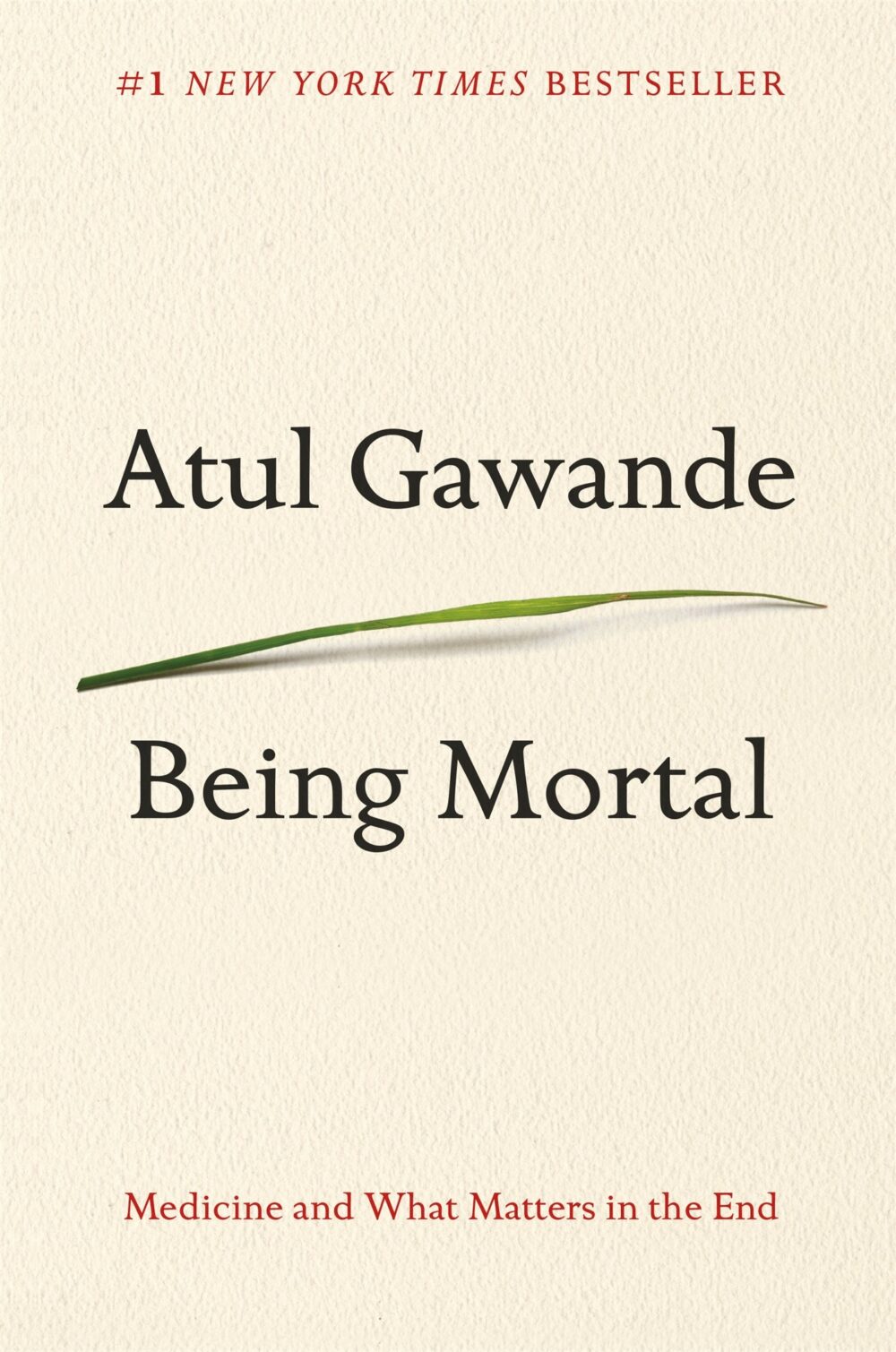 I rarely say things like, “This is a book everyone should read,” because reading preferences are so wildly varied, but the book Being Mortal tempts me to make that kind of blanket proclamation.

I first listened to the Being Mortal audiobook as we drove from North Carolina through Texas and then onto southern California via Phoenix in 2015.

Every time Bart would call to check how things were going with the girls or to confer about where to spend the night or stop for gas, I’d regale him with long recaps of what was going on in the book.

Then I told Ralphie all about it, followed by Merrick. Then my sister-in-law and finally my parents.

I’d read (most of) Complications: A Surgeon’s Notes on an Imperfect Science for our couples book club the previous year, and thought it was fascinating, and this newest book of his was instantly a best-seller, so I was definitely intrigued.

being mortal: medicine and what matters in the end

The main concept behind the Being Mortal book is that modern medicine has huge abilities to fight back disease, but in the long run, everyone is going to die, whether it’s from old age or prematurely from something like cancer.

Being Mortal has two major sections – the first looks at aging and how doctors and society deal with people who are losing their capabilities as they get older, and how elderly people feel about how they are treated. The second is about people with terminal illnesses and how doctors help people fight those and the various costs and benefits of those treatments.

In the first section, he discusses at length how little training in geriatrics there is for most doctors today. It’s a decidedly unglamorous field and certainly not one of the higher paid ones, but with an aging population, this is becoming increasingly problematic.

With our modern society, most elderly people live alone until they become to frail to be safe on their own and then they have one of two options: go to live with a family member (generally a daughter and her family) or go to a nursing home.

Gawande talks at length about the problems with nursing homes – how much elderly people hate losing their independence, being treated like an invalid and giving up privacy and personal belongings, and all care being taken over by an establishment that’s looking for efficiency and lowered risk.

He describes the first retirement homes and how they were designed to give people back their privacy and autonomy. At first there was a huge pushback against them because the idea that people could lock out the doctors and nurses and manage their own medications seemed way too risky, but the concept caught on and was wildly popular.

I especially loved the story of the ER doctor who took over a retirement center and immediately started pushing for animals. He was told there was no way they could get approval for a dog and a cat. He retorted that he didn’t want a dog and a cat – he wanted two dogs, eight cats, and 100 birds. And, unbelievably, he pushed through every hurdle until he got the necessary paperwork approved. The turnaround in the center was unbelievable, with people who they had thought couldn’t walk anymore or talk asking to walk the dogs, commenting on the diets of the animals, and asking to take over animal care tasks.

He’s so realistic about what aging looks like for most of us, but is also upbeat about how it can be a wonderful end to life, rather than something to dread or pretend won’t happen eventually.

And then the second part of Being Mortal, which I found even more interesting, was about care for people with diseases that may well kill them.

If your doctors are just looking at medicine as a way to push back death at any cost, there is a lot of damage they can do to you that keeps you alive but makes life pretty awful at the end. With modern medicine, there is almost no end to what they try – higher doses, experimental treatments, etc – so what you want is a good doctor who works with you to figure out how far you’re actually willing to go.

Death is the enemy,” Gawande says. “But the enemy has superior forces. Eventually, it wins. And in a war that you cannot win, you don’t want a general who fights to the point of total annihilation. You don’t want Custer. You want Robert E. Lee . . . who knows how to fight for territory that can be won and how to surrender it when it can’t.”

He talks about how many people who don’t want to undergo terrible treatment that will make the last months or years of their life horrendous, but do it because of pressure from spouses or parents to fight back at any cost.

One of the problems in his view is that doctors usually fall into one of two camps. They are either an authority who tells the patient what to do (this is the more old-fashioned approach) or they lay out all the options and let you pick (this is the more modern approach). Gawande talks about going with his parents, both doctors themselves, to figure out treatment for his father who had a spinal tumor. Between the three of them, they had somewhere in the vicinity of 120 years of medical experience and when the doctor laid out the options, they found it completely overwhelming to try and decide.

What you need, Gawande argues, is a doctor somewhere between the two; they lay out the options and then figure out what your priorities are to help you decide what the best options might be for you.

This made me think so much about what I might want if I were diagnosed with some horrifying illness or if my spouse, parents, or children were. What makes life worth living for me? What limitations would I be willing to live with and which ones would make me feel like I was ready to be done living?

(And don’t even get me started on how fascinating the parts about hospice were – totally changed my mind forever about what that meant).

Because I listened to it while driving, I didn’t have a means of marking passages that I particularly liked, which is too bad, because there was SO MUCH good stuff in it.

I wish I could have read the Being Mortal book with my book club in Texas because I know the discussion would have been amazing.

And, by the way, have I mentioned that I think you should read this? You should.

(P.S. You can get an audiobook version of it here – the audio of Being Mortal was fantastic, so if you’re inclined to listen, I’d highly recommend this one).