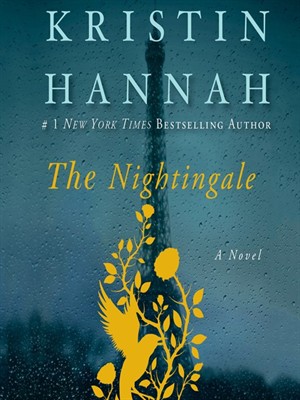 The Nightingale by Kristin Hannah has 23,000 reviews on Amazon and 170,000 on Goodreads, so I’m not exactly the first person to tell you about this book.

If you haven’t read The Nightingale, you totally should.

This was the final book of my most recent round of Tell Me What to Read and it took me forever to get to it because the hold lists were so long and then when it finally came up, I only got about 1/2 way through before my audio copy expired, so I had to wait in the hold lines AGAIN.

Anyway. I finally finished it this week and it was worth all the hold lines.

Vianne and Isabelle are sisters, but they’ve never been close. They’re far apart in age, and their mother died when they were both pretty young. Their father fought in the first World War and he never really recovered from the experience, pushing both of his daughters away after his wife died.

Vianne has married her childhood sweetheart, Antoine, and they have one daughter (a miracle in a string of miscarriages and stillborns). When war breaks out, Antoine leaves their quiet French village to fight on the front. Left at home, Vianne’s life doesn’t remain peaceful either as their home is taken over by a German captain, food becomes increasingly scarce, and her best friend, who is Jewish, increasingly becomes a target.

Isabelle, who has just turned 18, has spent her life running away from boarding schools and looking for love from both her father and her sister. When the war breaks out, she falls in love with a Resistance fighter, but when he too abandons her, she directs all her energy into the Resistance as well.

Of course, both of them are in impossible situations, where they have to make one awful choice after another, and they have no idea who to trust.

In addition to alternating between their stories, there is also an elderly woman who is returning to Paris from her current home in America to attend a remembrance event. You can assume from the beginning that it is one of the sisters, but you don’t know which one it is, and what that might mean about the other sister – did she die during the war? Is she still alive? Did they ever reconcile?

I loved that The Nightingale by Kristin Hannah showed so many different aspects of the war – life in the countryside and in the cities, Nazis who are decent people and Nazis who are just so evil, the Resistance movement, the concentration camps.

And yet, it didn’t feel like it was trying too hard to pack in every possible angle. Every bit of the story seemed natural to the narrative, with every choice, every new hardship, every new loss seeming almost inevitable as the war progresses.

It’s a heart-breaking story, not just because of those who die, but also because of those that have to live with the ways the war changed them, but it’s also hopeful. I listened to Sarah’s Key a couple of years ago and I found that book just so depressing. This one didn’t leave me with that heavy, dark feeling afterward.

I listened to The Nightingale audiobook and it is fantastically done. The narrators had lovely accents, and it was easy to follow along between the three separate story lines (which isn’t always the case on audio).

Also, if you want more WWII from a woman’s point of view, Code Name Verity reminds me a lot of this one and it is excellent.

If you liked this review of the nightingale by kristin hannah, you might also like these books: