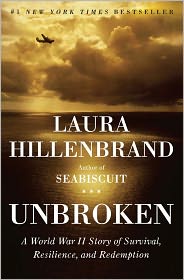 Two weeks ago, I’d never heard of Unbroken (if only it was getting more coverage or was by a better-known author. Oh, wait. I guess I just completely missed the boat on this one).

Then, while visiting Bart’s family in Utah, I saw it sitting on the kitchen counter, read the first chapter, and promptly requested it from my library to finish once I got home.

I knew absolutely nothing about Louis Zamperini. All I knew from the jacket flap was that his plane went down during WWII and he survived on a life raft for quite a ridiculously long time.

But there’s so much more than that. First, there is his childhood, where he is a terror to his town, stealing, fighting, and generally convincing everyone that he’ll come to no good.

Then, in high school, his older brother, Pete, steps in and gets him to join the track team. With somewhere to channel his excess energy, he discovers that he’s actually a pretty brilliant runner. He qualifies for the Berlin Olympics, and there is a lot of talk that he’ll be the one to break the four-minute mile (a topic I happen to be fascinated by, thanks to my dad’s reading of The Perfect Mile a few years ago).

Although he performs well in Berlin, he really is a little too young to be a serious contender for distance running (apparently distance running is more of an older man’s sport – who knew?), so he has his eyes set on the 1940 Olympics.

But then, of course, the war comes and the Olympics and his running dreams are put on hold and he ends up in the Air Force as a bombardier.

I hadn’t realized how treacherous flying a plane in WWII was. In state side training, 15,000 Air Corps men died. When the real fighting started and bombing missions were going on, 36,000 died in non-combat accidents. Louis flew in a B-24 (the same plane my grandfather flew, also as a bombardier, although he was doing European missions, rather than Pacific missions).

In one mission, just weeks before his plane went down, Louis’ plane sustained such intense fire that, when it landed safely (or, you know, safely enough) back at the US base, they counted 594 bullet holes in the plane.

Louis’ luck didn’t hold, though, and when he was sent on a reconnaissance mission on a plane known to be in poor condition, the engines failed and the plane dropped out of the sky, into the Pacific ocean. Of the eleven men on board, only three survived the crash.

And then Louis and the other two men begin a 47 day odyssey aboard an inflatable raft. There are some chocolate bars stored on it (made to be highly highly caloric and also very bitter so that the men aboard the planes wouldn’t be tempted to eat them in a non-emergency. Two squares a day could keep you alive for a while), but in a panic, one of the men eats all three bars the first night.

The saga of how they survive the raft would be story enough, but then they’re eventually picked up (after losing some 50% of their body weight) by Japanese soldiers who send them to POW camps on mainland Japan.

And suddenly the raft part of the story is sounding like the fun part.

There is so much I could talk about in this book – Louis’ eventual conversion to Christianity, years after the war, as he reflects on the three times on the raft that they knew they’d die if it didn’t rain within the next day, and he prays, telling God he’ll dedicate his life to Him if his life will be preserved (all three times, it rains that night or the next morning); how a Japanese plane tries to shoot them out of the water and the bullets are all around the raft, and even between the two men lying motionless, but none of them are even grazed by a single bullet.

I can’t stop telling my running partners about how, the morning of the crash, Louis runs a mile in the sand and clocks it at four minutes and twelve seconds. I’ve regaled Bart with stats about how for every US soldier killed in WWII, four were taken prisoner. For ever 120 Japanese soldiers killed, one was taken prisoner.

When the epilogue of the story talked about Louis continuing to love athletics throughout his life and taking up skateboarding at the age of seventy, I laughed and then I teared up.

In an NPR interview, Laura Hillenbrand says she rarely refers to him as a hero; instead she wants his story to stand as just one example of the experiences of many soldiers during WWII. And she does an excellent job doing just that.

Of course, Louis Zamperini’s story is astounding, but I never once had the impression that either he or Hillenbrand felt like the only way he survived was because he was somehow stronger or braver or better than other men.

Near the end of Unbroken, Louis’ older brother, Pete, is quoted as saying that he never met someone who didn’t like Louis. I felt just that way after reading this book – he’s someone you’d want to know, with whom you’d want to be friends.

But even a fantastic story and subject needs more than that to stand on. Happily, Unbroken has it all. I tend to judge non-fiction on how well it integrates background information into the storyline. Does the author seem to be bent on cramming in every piece of trivia they rounded up while researching? Does the author appear to believe every reader has a PhD level understanding of biology?

Unbroken gave an enormous amount of background on the war, Louis’ family and the families of those he came in contact with, the Air Force, planes, prisoner of war experiences, and other people who survived (or didn’t survive) on rafts in the ocean. And yet I never felt like it was extraneous. It always served the purpose of making Louis’ story more real, and more understandable. Not once did I think, “Why is THIS in here?”

I listened to the Unbroken audiobook version and it was phenomenally done. I particularly like listening to non-fiction and history because I’m not making up my own pronunciation.

It really is a brilliant book. It’s informative, moving, inspiring, educational, and sometimes even funny. What more could you possibly ask for in a book? I couldn’t ask for more.

[Edited to Add: Julie correctly noted that, due to the subject matter, there are some fairly graphic and violent aspects to the book. I never felt like it was gratuitous, but keep in mind that it is a war story and a POW experience at that].

Previous Post: « Along a Long Road by Frank Viva
Next Post: More than You Wanted to Know about My Clothing »