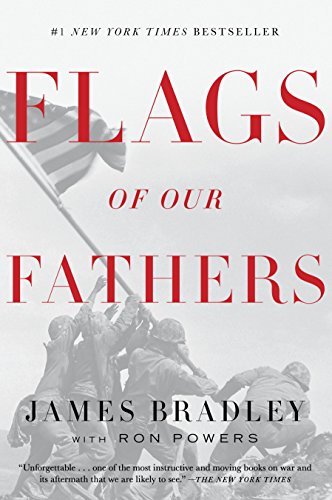 Flags of Our Fathers was our July read for one of my bookclubs.

And after ten pages, I couldn’t stop telling people about it.

Flags of Our Fathers was a book where I suddenly realized how MUCH I didn’t know about something famous. Before this book, I’m pretty certain I could have identified Iwo Jima as a WWII battle. And I’m fairly confident I could have said it was a Pacific battle. But beyond that, I think I knew nothing.

I didn’t realize that it was six men that raised that flag over Iwo Jima. I had no idea that the flag was raised – in pretty tranquil circumstances – after a few days of the battle, but that the fighting continued to rage on for a total of 36 days.

I didn’t know that Iwo Jima was so strongly defended by the Japanese because it was considered part of their homeland and thus an attack on their country. I didn’t know the Americans wanted it so badly because every time they flew planes to Japan in order to bomb, they got shot at both on their way their and their way back. I had no idea that the US casualties were over 26,000 (the Americans sustained more casualties than the Japanese, even though they won). I didn’t realize that number only seems high until reading about the battle itself, and then I was amazed that it wasn’t a 100% slaughter.

I certainly didn’t know that this iconic flag-raising image was captured almost by accident – the photographer took the picture without looking through the view-finder and didn’t see it until later. I absolutely had no idea that this was the second flag-raising over Iwo Jima (the first took place earlier and then a Navy officer wanted the flag as a souvenir, so one of the Marine commanders had some men go take down the first flag to protect it from Navy pilfering and had the second flag put up in its place). I didn’t know that FDR sent a presidential order to the Marines to identify the men in the photograph and then have them brought back to the US to appear on the tour to raise war bonds.

Flags Of Our Fathers by james bradley

The author of Flags of Our Fathers, James Bradley, is the son of one of the flag raisers. His father was a Navy Corpsman (medic) and got pulled in to serve with the Marines. In a letter home to his parents, he mentioned the flag raising and said it was one of the happiest moments of his life. He was awarded a Navy Cross for his heroics during the battle.

Then he came home (after being wounded), married a girl he’d known since third grade, raised eight children, and never spoke of the war, Iwo Jima or the flag-raising again. His children knew vaguely that he’d served in the war and that he was in the famous photograph, but beyond that, it simply wasn’t part of their lives. His father never spoke to reporters, went to reunions, or participated in documentaries. His children knew that, if a reporter called, they were to say their father was fishing in Canada.

After his father’s death, James Bradley found his father’s letters from the war and found himself fascinated with the flag-raising. He tracked down the stories of the other five flag-raisers and Flags of Our Fathers is the result.

Three of the flag-raising Marines never came home – they were all killed before Iwo Jima was over. His father came home wounded, with shrapnel in his leg and foot that he’d carry for the rest of his life. One flag-raiser, already inclined to alcoholism before the war, came home with terrible survivor’s guilt and drank himself to death within a decade. And the sixth man, pushed on by his wife, looked for fame and success because of his actions, neither of which he ever really found.

Flags of Our Fathers does a fantastic job of combining the human element with the facts of the war – this book was as gripping to me as any novel. I never felt like it got bogged down in the details, but I also felt like it gave plenty of background and context to make the story meaningful and memorable.

My impression is that the European side of WWII is far more discussed, recorded and taught, so this book gave me a whole new view of the War in the Pacific. I understand better why the three main leaders of the Allies felt like dropping the atomic bomb was a pretty obvious choice. I realize now why this photograph is so famous. And I understand (and appreciate) the role of the Marines far better than I ever did.

There is an audio version of Flags of Our Fathers that is highly abridged and I had that checked out along with my hard copy, but I wouldn’t particularly recommend the abridged audio version because you miss a great deal of the story. Every time I would try and speed up my reading by listening to a bit, I’d end up going back to read the whole section  in the book because it skipped so many fascinating stories and anecdotes. This. . .was not a time-saver, as you can imagine.

This book was SO fantastic. I highly highly recommend it.

(Of course, as with most war books, there are some gruesome events, although I did not find it at all gratuitous. There is also a few instances of the f-word, etc, but they are brief and infrequent).