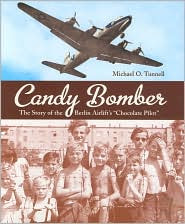 9 of 10: Candy Bomber: The Story of the Berlin Airlift’s “Chocolate Pilot” is a terrific non-fiction offering for older elementary students and middle grade readers. It was a story I’ve never heard before and it also explained the post-war occupation of Berlin more clearly than I’d understood it before.

I picked this book out of the Charlesbridge catalog based solely on the title and when it arrived earlier this week, Bart was with me when I opened the box. When I pulled this book out, Bart said, “Hey, that is my friend’s grandfather!” Who knew?

Amusingly, when I opened The Candy Bomber and saw some of the pictures, the family resemblance between the pilot and Bart’s friend (who I know quite well) is extremely strong, which made the book even more fun for me.

The story is about Gail S. Halvorsen, an Air Force pilot after WWII, who was stationed in Germany after the war. During a brief tour of Berlin, he met some children and handed them some gum (there were about thirty children and he only had two sticks), but felt badly that there wasn’t enough for all of them. He told them he’d collect some candy and then drop it by plane over the fence where they were standing. They asked how they could identify his plane and he said he would wiggle the wings before he dropped it.

He thought he might get in trouble for it, so he didn’t ask his commanders if it was okay to do so, instead asking his fellow airman to donate their candy rations to him. Despite the great worth of candy (which was practically non-existent in Germany), many of the men pitched in, and Halvorsen made little parachutes out of handkerchiefs so that the candy wouldn’t hurt the kids when it dropped.

Over the course of a few weeks, he and a few other airmen a few more drops (the crowds of children getting larger each time), until he was called in by his commander who had been notified by the government after a reporter nearly got beaned by a candy bar and wrote an article that was spreading through Europe. The commander wasn’t angry that Halvorsen was dropping candy, he just felt stupid that he’d been called with congratulations on the good publicity for the US military in Berlin and he hadn’t known anything about it.

After that, donations started pouring in and the candy drops became larger and more frequent. And it just got bigger from there, as Halvorsen likes to say, “for two sticks of gum.”

The Candy Bomber gives enough background to make the situation make sense, but not so much that it’s distracting or that it drags. I didn’t know anything about the Berlin Airlift project before this and it explained it in very clear terms.

The Candy Bomber book is full of great pictures and images and it’s a quick read (I finished it in less than an hour). This is a book that is definitely worth picking up.