Ignore It! is THE best parenting book I’ve ever read – it’s helped break the bad cycles of reinforcing bad behavior and missing good behavior that I’d fallen into. Our whole home is so much more peaceful and parenting has become wildly more enjoyable for me. Buying this book is the best $10 you will ever spend. 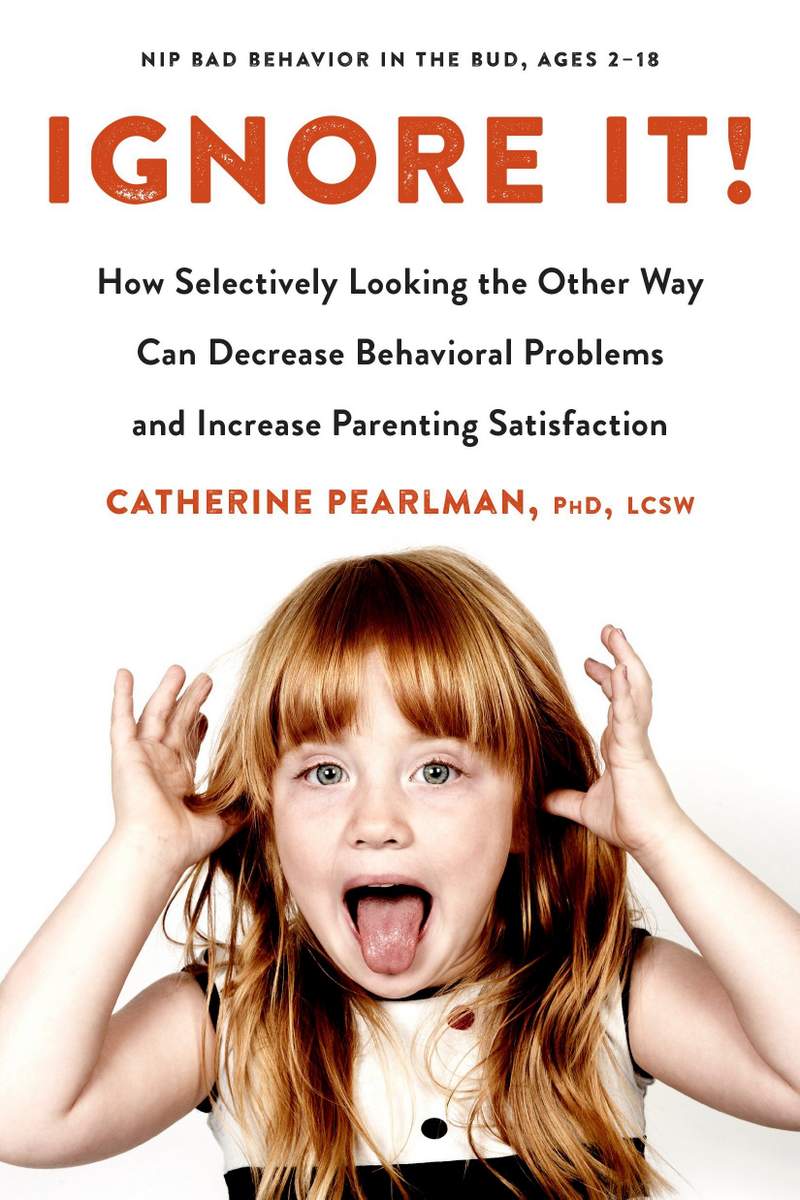 One of my favorite Gretchen Rubin quotes is “When the student is ready, the teacher appears.” (It’s not her original quote, but I learned it from her).

That’s how I felt about Ignore It! by Catherine Pearlman.

I’d picked up a copy at a conference more than a year ago and it sat unopened on my shelf all that time.

Then, when we were packing up our things at our Arizona house, I was choosing a few books to keep out and read until we unbox everything later this year or next, and this one caught my eye.

I started reading it a few days later and plowed through it at lightning speed – it was JUST the thing I needed to help me during the rocky transition that a move always brings.

Ignore It! by Catherine Pearlman

The basic premise of Ignore It! is that much of children’s behavior is attention seeking. If a child wants your attention and can’t get it through good behavior, then they’ll turn to annoying behavior (whining, tantrums, disobedience, etc).

Then when you respond, even if it’s with anger or frustration, you are reinforcing that behavior as a behavior that works to get attention.

Dr. Pearlman talks about how by ignoring that behavior, your child learns that it no longer works and they’ll stop doing it.

Ignore It! in Action

One of the biggest places we’d been struggling in our house for many many weeks was bedtime.

Our girls came out ten million times (especially Star), and I felt like no matter how I handled it (consequences, getting mad, giving extra attention and snuggles), nothing worked.

The only thing that seemed at all to work was when she was so tired that she fell asleep in a few minutes and I didn’t have to deal with it.

So the second day after we moved, with all three of our big girls sharing a room for now, I decided to give it a try since I could tell that if I didn’t do anything, I was going to continue dealing with this every night and it was going to make me lose my mind.

As I read the book, I suddenly understood that I was 100% reinforcing the behavior of coming out of their rooms, calling for me, or behaving terribly. Whether I got mad or came in and loved on them or some other reaction, I was accidentally teaching them that those behaviors were effective for getting me to give them attention.

Which was DEFINITELY not what I intended.

So I decided to give it a try because it was just getting too much to handle.

I tucked them all into bed, told them that I wasn’t coming in again and that they shouldn’t come out, and then went upstairs.

The first night, Star laid on the floor at the bottom of the stairs and screamed for 20 minutes. Once she stopped, I quietly took her back to her room and put her in bed and she was asleep in two minutes.

The next night, there was no screaming, but Star did sit on the stairs and whine for about 5 minutes. When she realized it was doing no good, she went and got back in her bed and went immediately to sleep.

Since then, it’s basically been like magic – my children all get in bed and go to sleep, even with them all in the same room.

I’ve heard Ralphie from Simply on Purpose talking about this (she calls it “ignoring junk behavior”) and believed it, but this book felt like a really helpful manual to walk me through all the steps and give a bunch of examples for children of all ages, from 2 year olds to teenagers.

Ignore It! helped me realize that I was also reinforcing all sorts of other behavior I was REALLY not interested in from my children. Whining, for example, got my attention every dang time. Which meant my children knew instinctively that whining would pull me away from making dinner, looking at my phone, or reading a book.

I also really like how Dr. Pearlman talks about the steps – first you ignore, then as you’re ignoring the behavior you don’t want to reinforce, you listen attentively and then reengage as soon as they’ve stopped the behavior you want to get rid of. Then, if necessary, you make repairs (clean up a mess they made in their tantrum, etc) and move on.

The first half of the book talks about ignoring it – the scientific backing and research for it, how to make it work both at home and in public, and how it might get worse before it gets better.

The second half is about positive attention.

Because if you’re just ignoring negative behavior, that’s only half of the puzzle. You need to reinforce the behavior you WANT to see.

For instance, once I started ignoring bad behavior at bedtime, I was very motivated to being super attentive and loving in the morning when they woke up – I snuggle them, we read books, I talk to them during breakfast and it’s actually MUCH easier for me to do so because I’m not drained from dealing with bedtime antics for two or three hours every evening.

It’s encouraged me to watch for the behavior I want (being kind to siblings, helping out, being obedient, speaking in nice voice without whining or baby talk or other annoying things) and give positive reinforcement for it.

I feel like I’m finally breaking free of some of the worst cycles of parenting that I was getting stuck in and feels like absolute freedom for me and for my children.

Other parts of the Ignore It! book

There’s also a section about rewards for children (this has been REALLY successful for our family), consequences, and frequently asked questions.

It’s basically the most helpful books I’ve ever read in my parenting experience.

When I talked about it on my stories, I linked to it on Amazon and within 12 hours, it COMPLETELY sold out.

Apparently I’m not the only one who needed help.

The book just restocked today and is available now both on Kindle and in paperback version. Basically the best $10 I can imagine spending.

I feel like these principles have completely changed my parenting life for the better – as the subtitle promises, the behavioral problems have gone WAY down and my happiness with parenting has increased substantially.

I’m also SUPER excited because I got in contact with Dr. Pearlman and she agreed to do an IG Live on Wednesday to answer questions and help troubleshoot for parents along with Ralphie from Simply on Purpose.

If you have a question about how and when to ignore or anything else you’d like answered, leave a comment or shoot me an email and we’ll talk about as many as we can this week.

If you liked this review of Ignore It!, you might also enjoy these books:

Previous Post: « My Favorite Places to Buy Dresses for Girls
Next Post: The “To All the Boys I’ve Loved Before” Movie – WAY too many thoughts »