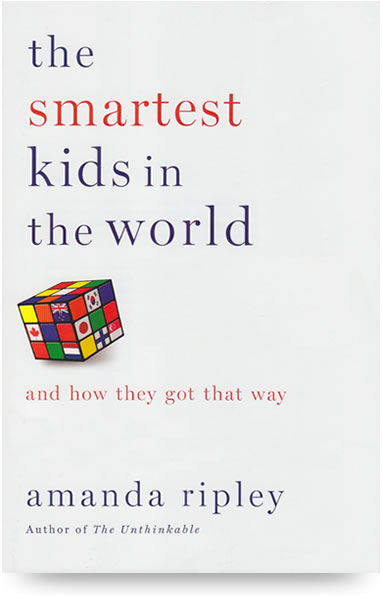 A few days after my mom left London, she emailed to say she’d picked up a copy of The Smartest Kids in the World in the airport to read on her flight home and that it was fantastic.

So obviously, one of the first things I did once I arrived in Vegas was snag her copy and read the whole thing in a few days.

Yesterday, I spent a good 30 minutes telling Bart all my favorite parts while we were FaceTiming (the girls kept wondering when I’d be done and he could get back to singing them silly songs). It’s really a terrific and fascinating book.

The Smartest Kids in the World is the story of three different countries and why their students are the top-performing children in the world, and what those countries do differently than the United States.

(News flash: The U.S. is not all that impressive in the education game. I know you are shocked).

The three countries are South Korea (not a big surprise there), Finland, and Poland. In addition to a fair amount of background about their educational systems, she also follows three high school students who are U.S. foreign exchange students in each of these countries, so she gets a pretty good peek at what the daily life is like in these schools.

I could talk your ear off about what these schools do differently than American schools, but I’ll just share a few things that stood out to me:

The Smartest Kids in the World: And How They Got That Way

All of that is not to say that these countries have perfected education.
South Korea, especially, is a total pressure cooker, and the high performance of their students comes at the expense of spending ALL DAY at school, both public education all day and then private tutoring in the evenings.
Finland, on the other hand, gets even better scores and their students spend far less time in school and aren’t operating under unbelievable stress and pressure for twelve years.

And a lot of the things these countries are doing could be replicated without too much expense or difficulty in the U.S.The one thing that showed big results across the board in all countries was parents who read to their children from an early age (I’m sure you never saw that one coming). And then, as their kids got older, they discussed current events and continued to read together or at least discuss the things they were reading individually. So pull out the picture books.

Of course, with Ella hitting the kindergarten age this next summer (my baby! the time! etc), this is all top of mind for me, and I especially appreciated the appendix that talked about how to find a world-class education for your child no matter where you are (and without having to spend $30k a year for elementary school).

Mainly, Bart is thanking his lucky stars that we were separated by an ocean and the entire continental U.S. while I was reading it or he would have gotten a page-by-page summary of The Smartest Kids in the World over the last week.

Previous Post: « Raiding My Sister’s Closet: How to Look Decent on Christmas Morning
Next Post: Before There Were Five »