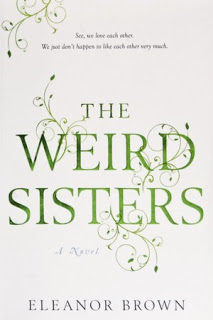 You know how, when you love a book (or a person or a restaurant or an item of clothing), you can overlook flaws? You think, “Oh, I didn’t even notice that the writing was terrible/she bites her nails/the restaurant never has cold water because everything else is so great!”
And in the opposite way, when something irritates you, you are very quick to notice even more flaws. “I knew I didn’t like this restaurant. Not only is the food terrible, but the parking stinks and the waiter is rude.”
The Weird Sisters, sadly, irritated me enough from the beginning that I found myself just looking for things to be bothered by (and, as is almost always the case when you’re looking for flaws, they are to be found). I didn’t like the first person group point of view (“We were too easy on her, yes. . . “), I have deep distaste for books where affairs are a large part of the storyline, and I found all three sisters unlikeable. I found all the Shakespeare references to be a little pretentious. Sometimes, I’m just a big grumpus (as we call them in our house).

the weird sisters by eleanor brown

The Weird Sisters is about three sisters (all named for Shakespeare women by their Shakespeare-obsessed professor father), all grown and now drawn back to their childhood home, ostensibly because of their mother’s recent cancer diagnosis, but really because they’re all freaking messes.

Rose is engaged but can’t stand the thought of leaving her hometown, even though the opportunities for work for both her and the fiance are small, Bianca has fled the tiny college town for NYC which was all well and good until she started embezzling money from the small law office she works at and now has no references, no money, and also an enormous debt to settle (why they didn’t have her arrested is beyond me). And Cordelia has spent her life flitting from place to place, living on the road, and now is pregnant (and she’s not hundred percent sure, even, who the father is). Also, she has no money, no real skills, and no college degree.

In The Weird Sisters defense, there was some clever writing, pages where I turned down the corners to mark a line that struck my fancy (like when Bianca is talking to the new pastor of the local church who assigns her ten Hail Marys as a joke and she reminds him that he isn’t Catholic. “‘Excellent point,’ he said. ‘I’ll have to look it up in my Catholic to Episcopalian penance converter,'” or when Rose’s fiance asks her what her life would have been like if she hadn’t been the oldest sister and thus always the one in charge and she responds, “I’d probably have a less intense antacid habit.”)

So, The Weird Sisters is not the worst book I’ve ever read. In fact, by the end, I felt like it had redeemed itself a little. I mean, not enough to recommend, but enough to not make me wish to throw the book across the room in disgust.

Also, Merrick and Landen? I’m really glad we aren’t these kind of insane sisters (at least I don’t think we are).