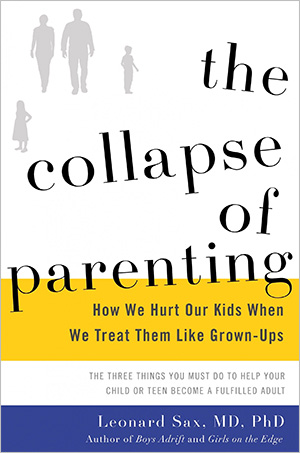 I read Boys Adrift about seven years ago – I can’t remember how I heard about it or why I picked it up, since I didn’t have any children, but I’ve remembered the major points of it all these years and was really impressed by Sax’s straight-forward and interesting writing style, plus his practical suggestions for parents.

So when I saw The Collapse of Parenting, which came out last year, I knew I wanted to read it immediately.

And it was one of those books that once I started it, every other book in my currently-reading pile got completely ignored until I’d finished this one.

Also, Bart was out of town, so every night when he’d call, I spend thirty minutes of our phone call reading him sections of the book and telling him stories from it. I’m sure that’s EXACTLY why he called home.

the collapse of parenting by leonard Sax

The basic premise of The Collapse of Parenting is that the current culture is one of disrespect (not only toward parents, but toward teachers, peers, and basically the entire world) and that parents have very little authority in their own homes over their children.

That lack of parental authority leads to major breakdown as children grow up without the skills to deal with the challenges of teen and adult life.

He then has four chapters about ways you see this lack of authority playing out in negative ways in today’s society.

First, there’s health. Because most kids would choose junk food over healthy food and watching TV and playing video games over active play, and without a parent there to say “You’ll eat what we serve” and “the TV is off for the rest of the afternoon,” kids are more likely to be overweight and out of shape. He’s certainly not saying this is the only cause of childhood obesity, but it is a contributor.

Second is how many American children are now on prescription medications (if you’ve read any of Sax’s books, you know he’s pretty cautious about medicating children. Some children get major benefits, but the skyrocketing numbers of childhood prescriptions are cause for concern).

Third, is how far Americans are falling behind academically – no surprise here. He quotes The Smartest Kids in the World, which I thought was a really thoughtful look at American education versus the education systems in other countries. There’s also theories that say that disrespectful American students is the price we pay for higher creativity, but the stats point to decreased American creativity, with the number of new businesses formed in the U.S. dropping by half in the last 35 years, across all states and economic sectors (again, new businesses aren’t the only indicator of creativity, but those numbers are not reassuring).

And fourth, and most interesting to me, was how fragile children are now, meaning they really struggle to deal with setbacks and disappointment in sports, school, friendship, and work, which is a bad thing as they grow into adults. Anxiety and depression are on the rise, and in a decade, America has dropped from the country with the most employed or job-seeking young people to 8th (this might seem like a problem with the economy, but no other countries saw changes like this except Australia which jumped from #7 to #3 – it just appears that fewer American young adults are concerned with having a job or looking for one).

I’ll admit that there were parts in this first section where I was a little skeptical about the causation in some of his claims. I think there are generally good principles, but I’m not sure it’s as cut and dry as he makes some of it seem.

The second half of the book is dedicated to solutions, and this is where I think Sax really shines and where I felt more solidly on board with this book. It focuses on three main things that parents can do to raise healthy, happy, and self-reliant children.

But before he gets to those solutions, he spends two chapters talking about the importance of teaching your child self-control and conscientiousness (e.g. honesty, hard work, responsibility, etc) and also the common misconceptions that you can’t be both loving and strict as a parent. Sax refers to parents who are both loving and strict in their relationships with their children as “just right” parents (that is, not too lenient and not too harsh).

(I’m sorry, but is this the longest blog post in the history of the universe? I hope you had nothing better to do than read this. You also probably could have read the entire book in less time).

So! The three things he talks about for being a “just right” parent.

First, teach your child humility. Which is basically a totally unAmerican virtue right now. We live in an era of self-esteem building and trophies for everyone. Sax defines humility as being as interested in other people as you are in yourself. In not feeling like you’re better than everyone else and your views, thoughts, and activities are more worthwhile, interesting, and better than anyone else’s. Sax’s number one suggestion for teaching humility is chores.

He says that by letting your child off the hook for chores around the house, you’re telling them, “Your time is too valuable to be spent on menial tasks” which is easily interpreted over time as “YOU are too important to do menial tasks.” (And unless you have a housekeeper, it basically means that you as the parent are perfectly unimportant enough to do menial tasks. No surprise, then, when that child doesn’t respect their menial dishwashing parent and that parent’s time).

Next, he talks about making sure you enjoy your time you spend with your child, which usually requires that you stop multi-tasking (studies show that dads enjoy their time with their children more than moms do, and part of that seems to be that dads are more likely to fully engage with their children rather than trying to also check their work email or do household tasks while they are with their children. Of course, if you’re a dad home with your child for only an hour or two day, it’s a lot easier to focus during that time than if you’re a stay-at-home mom trying to keep the household running, possibly running a side businesses or working part time AND being with your children). He’s an advocate for slowing down and not running your family ragged with events and activities, and, of course, putting down the devices.

Sax is quick to point out that raising children is never a 1+1=2 activity. You can do everything “right” and have a child who flunks out of college or ends up in jail for drug dealing or hate you and never wants to speak to you again. But you can increase your child’s chances of success with focused parenting, and I felt like this book really inspired me to be a better, stricter AND more loving parent.

And finally, teaching your children the meaning of life. That success isn’t the same as happiness, and that probably not everything in your life will work out how you hope, whether that’s not getting into your dream college, losing your job, the death of a spouse or child, health problems, and all the other numberless possibilities. The point of this life is not to be famous or rich, and to learn that it’s okay to fail and how to move past failures and disappointments. If your child feels like their whole identity rides on being accepted to Harvard, what happens when they get the rejection letter? What are you teaching your child by example about what really matters in life and how happiness is obtained no matter what your house and cars look like or how big your bank account is or how prestigious your job is?

The Collapse of Parenting is really a pretty quick read (and the actual book is only 200 page), but I feel like it asks some really significant questions that I kept mulling over long after the book was done.

I’ve been much faster to require my children to help around the house and expect them to quickly do as I ask. I feel like it’s helped me recognize more clearly that Bart and I are the authorities in this house and that just because some of our children are capable of throwing impressive tantrums when they don’t get what they want doesn’t mean they get to run the show.

I know I say this every time I read a really great non-fiction book, but I’ll say it again. If I belonged to a book club where I was responsible for choosing a book, The Collapse of Parenting would be the one I’d pick this year.

Now I need to read his book focused on parents of daughters, Girls on the Edge.